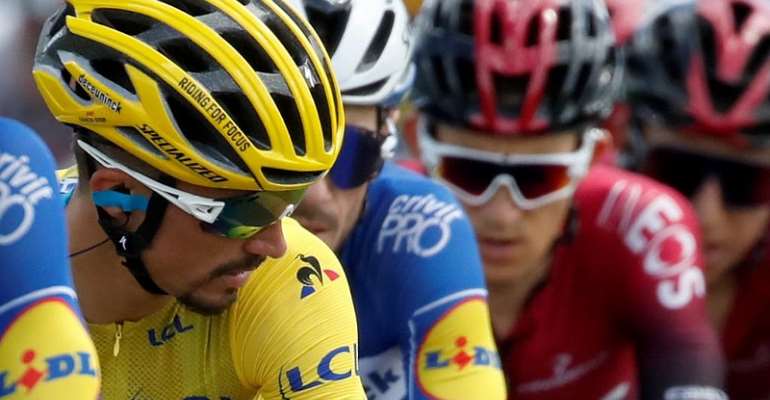 The French leader covered the final 75 kilometres of the 111km stage in the vehicle carrying Tour de France director, Christian Prudhomme. Macron is known to be an enthusiastic cycling fan, and was last seen on the fringes of the Tour in 2017, shortly after his election, when he watched the 17th stage over the Galibier in the Alps.

He failed to make a public appearance last year, because the so-called Benalla affair in which a presidential bodyguard was filmed roughing up protestors had just become public.

Speaking in the city of Pau, President Macron praised the "mythology" of the Tour, and the heroism of the competitors. He said popular enthusiasm for the legendary cycle race springs from the national urge to take risks, show courage and determination, dream beyond the idea of the impossible.

The start of Saturday's 14th stage was delayed and had to be displaced from the centre to the outskirts of the southern city of Tarbes, because of a demonstration by protestors opposed to the establishment of an industrial pig farm in the countryside between Tarbes and Lourdes.

The stage is set to end at the famous Col du Tourmalet, the mythic Pyrenean mountain pass at 2,115 metres above sea level, in the shadow of the Pic de Midi observatory.

It remains unclear whether Emmanuel Macron will present the race leader's yellow jersey at the end of today's stage. The French rider Julian Alaphilippe started the day with a narrow overall lead. Today marks the 100th anniversary of the introduction of the special top worn by the race leader. But Macron may not wish to be too closely associated with any garment coloured yellow.