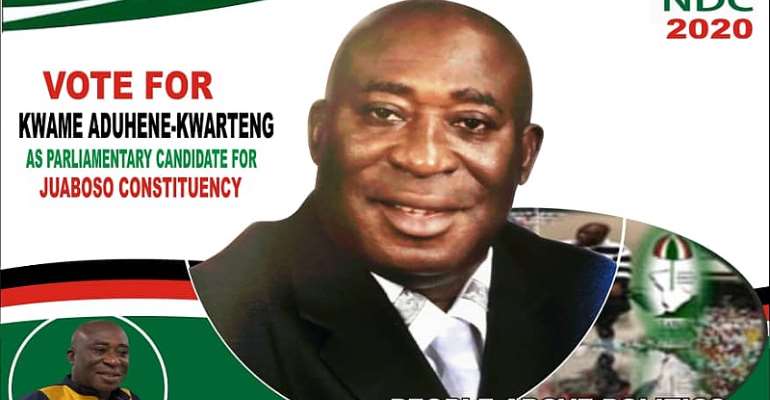 The Deputy Secretary of the Washington Metro Area Branch of the National Democratic Congress (NDC) in the United States of America, Kwame Aduhene-Kwarteng, has picked nomination form to contest in the party’s parliamentary primaries in the Juaboso Constituency in the Western North Region of Ghana.

Kwame Aduhene-Kwarteng popularly known as Castro hails from Sefwi Sayerano in the Juaboso District and was born to the Late Joseph Richard Kye of Sefwi Agyemandiem and Madam Adwoa Nsiah a farmer of Sefwi Sayerano.

Kwame had his elementary school education at Sefwi Sayerano Anglican Primary School and Sefwi Benkyema Anglican Middle School and continued to the Huni Valley and Amenfiman Secondary schools completing in 1985. After completing his sixth form education, he did his National Service at the Amenfiman Secondary School after which he joined the Ghana Armed Forces as a Military Police and was stationed at the Uaddara Barracks in Kumasi in the Ashanti Region.

Kwame Castro holds double degree in Criminal Justice and Strategic Leadership and a Certificate in Operational Leadership from the Southwestern College-Professional Studies in Wichita, Kansas in the USA. In addition, he holds a Master's Degree in International Relations and Conflict Resolution from the American Military University (AMU), and Certificate in Uniform Police Training Program (UPTP) from the United States Department of Homeland Security Federal Law Enforcement Training Center. He also practices as a freelance journalist.

Most of the NDC delegates in the Juaboso Constituency who spoke to this reporter claimed that the Constituency is the stronghold of the party but the margin of the vote between the NDC and the closest contender, the NPP, keeps on dwindling and that they needed a new candidate to bring back the lost fortunes of the party.

This portal also learned that Aduhene-Kwarteng is also a philanthropist who has been supporting development projects in the Juaboso area and even beyond and he is fondly liked by the people, chiefs, elders, and the youth of the area.

Kwame Aduhene has since resigned as the Deputy Secretary of the Washington Metro Area Branch of the NDC in accordance with the Party’s constitution to enable him to contest in the parliamentary primaries.