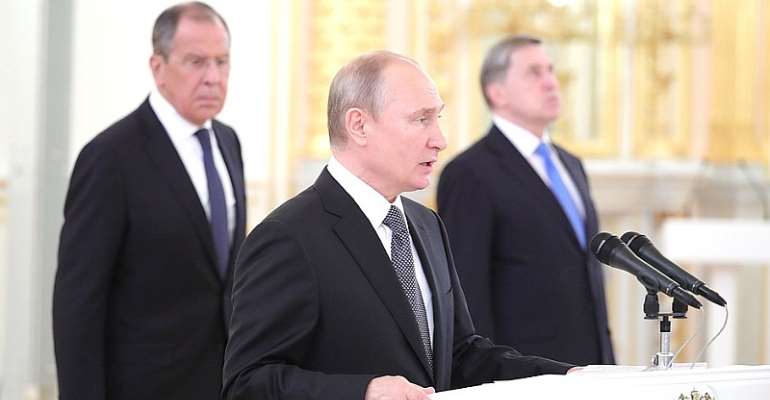 President Vladimir Putin has accepted the credentials of 18 newly appointed foreign ambassadors, among them seven from Africa, in a traditional ceremony in the St. Alexander Hall of the Great Kremlin Palace on July 3, and tasked them to facilitate the development of multifaceted relations between their individual states and Russia.

He reiterated that “Russia is open to mutually beneficial cooperation with all states without exception based on equality and respect for each other’s interests, non-interference in internal affairs and strict compliance with international law.”

In the near future, Russia will host a series of major international events. In June, Russia assumed the presidency of the Shanghai Cooperation Organization, and will also preside on BRICS (Brazil, Russia, India, China and South Africa) from early 2020. Russia is steering towards a joint-partnership, and aims to advance common priorities in such areas as politics, security, economy, finance, culture and humanitarian ties.

Russia is planning to review cooperation prospects and the implementation of major joint investment projects in the Asia-Pacific region and to exchange opinions on ways of merging various integration processes so as to create a major Eurasian partnership.

Russia is preparing actively for the first Russia-Africa Summit late October in Sochi and will be preceded by the Russian-African Economic Forum. President of Egypt and incumbent Chairman of the African Union, Abdel Fattah el-Sisi, will co-chair the Sochi forum together with Putin.

Accordingly, invitations have been sent to all heads of the African states, as well as the leaders of major sub-regional unions and organizations. It is expected that this summit to propel a dialogue between Russia and Africa to a qualitatively new level, help ensure peace and security in the region, as well as a stable development on the African continent.

Later in his address, Putin told Ambassador Denis Kalume Numbi, Democratic Republic of the Congo, that Russia was interested in further developing cooperation with the Democratic Republic of the Congo in politics, trade, and international affairs, and would continue assisting Congolese partners in improving the socioeconomic situation in their country.

He noted that Russia’s relations with Sierra Leone has been based on the traditions of friendship and mutual understanding, and Russia hoped for joint work in such sectors as mining, agriculture and fishing. Sierra Leonean Ambassador is now Mohamed Yongawo.

At the ceremony was Alemayehu Tegenu Aargau from the Federal Democratic Republic of Ethiopia. Putin expressed satisfaction on the level of cooperation with Ethiopia. Last year, Russia and Ethiopia marked the 120th anniversary of diplomatic relations. Over the years, bilateral dialogue has covered a range of important political, economic, research and education topics. Besides, Russia and Ethiopia continue to strengthen cooperation in international and regional affairs.

Russia satisfied with cooperation with Namibia. “Cooperation with Namibia is successfully developing in such sectors as mineral resource development and uranium mining, as well as in the energy, fisheries, agriculture, tourism, military-technical and cultural areas,” Putin told Clemens Handuukeme Kashuupulwa from the Republic of Namibia.

“We work together with Mauritania in marine fishing and hydrocarbon production. Our Mauritanian partners make a significant contribution to the fight against terrorism in the Sahara-Sahel zone,” the Russian leader said while receiving Ambassador Hamid Hamouni.

Russian authorities pledged to help and offer necessary assistance to all foreign envoys in pursuit of their official assignments in the Russian Federation. Present at the ceremony were Sergei Lavrov, Foreign Minister of Russia and Yury Ushakov, Aide to the President Putin. *Kester Kenn Klomegah writes frequently about Russia-Africa and the BRICS.

Voters’ Registration: Everyone Will Be Safe – A/R Minister A...
24 minutes ago