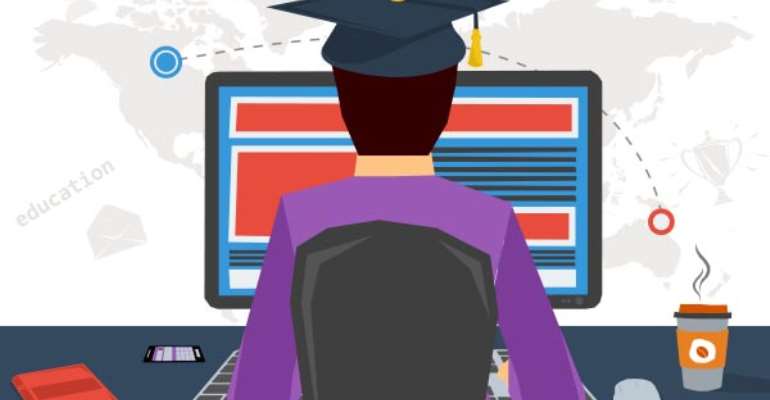 It has become a national debate on the nature of distance education run by the University of Cape Coast for students who are not able to enrol onto the regular programmes. While it is undeniable that the UCC's Distance Education(DE) has helped produce more graduates who could not be absorbed into the main university campus due to their work schedule and proximity, others also have the conviction that products of their distance education of late cannot be compared to their mainstream counterparts.

One of the critics of the UCC's distance education programme is Counsellor Daniel Fenyi, an educationist who believes that the DE programme is of low standard, producing half baked graduates who do not fit into the employment market. In his article which went viral on social media, he accused the university of admitting students with weak passes into their DE programmes, running confused programmes, employing lecturers with low education background to teach under the DE module, making people look down on DE graduates who consequently face employment challenges.

On 1st July, the management of UCC in a damage control exercise, issued a press release which sought to rebut the accusations outlined by Daniel Fenyi, which in my estimation, sounded unconvincing. It would have been better if they had chosen the golden path, to remain silent while they rethink the ways of restructuring their DE to restore the lost confidence in the pursuance of the programme.

In the press release, the UCC management denied admitting students with weak passes and admitted conducting a mature entrance examination for mature students with good passes to learn from the comfort of their homes. This is totally untrue. There is an innumerable number of students pursuing the Diploma in Psychology and Foundations of Education programme with E8s and F9s in their WASSCE results in more than two subjects, a situation which will never be thought of in the mainstream admission. If the management of UCC would challenge, they should come out with all documents on their admissions into the above named programme over the last few years for a private auditing firm like KPMG to thoroughly audit the results of students who had been admitted.

Again, when the UCC first introduced the Bachelor of Psychology and Foundations of Education programme, the entry requirement was strictly a First Class or a Second Class Upper division for Diploma in Education applicants. Currently, the standard has been lowered to the rock bottom, admitting applicants with Third Class and Pass. Wouldn't the management of UCC maintain the standard if they really cared about reputation more than money?

On the running of "confused programmes", the management replied that the programmes they run are reviewed to catch up with modern and global trends in education and cited the introduction of new programmes like BEd. in Accounting, Management, Social Studies and Arts. None of these new courses are, unfortunately, run under their distance education module. These new courses are subject specific, compared to the BEd. in Psychology and Foundations of Education in English programme with a lot of ambiguity in its boundaries as it has combined three major disciplines, Psychology, Foundations of Education and English. In any case, if UCC management deem the programme fit and meet global trends, why not introduce it as a regular programme?

I disagree with Counsellor Fenyi that only PhD holders qualify to lecture in the university. The truth is that a Masters degree holder (researched masters degree) qualifies to lecture students below his/her qualification. The UCC management's excuse, however, that the modules, written by Professors and other seasoned lecturers are interactive enough for unqualified tutors to teach is completely flimsy. Will it be a good practice for a Senior High School Chemistry tutor to also write an interactive Chemistry notes and hand it over for an SHS graduate to teach?

Finally on the unemployment of the DE graduates, the management was quick to put the blame on government and described it as a national problem. The hard core fact is that most educational institutions are reluctant to employ these UCC DE graduates of late because the standard is so low. Last year, the Ghana Education Service placed a ban on the recruitment of teachers who pursued distance education programmes and wanted to teach in the Senior High Schools. Although the same certificate is awarded to both distance and regular students upon completion, the academic transcript discriminates between the two.

I still side with Counsellor Fenyi that there is a free fall of the standards of the UCC DE and if proper restructuring is not done by management, it will eventually head into the abyss. By then, its enviable accolade of being the 'University of Competitive Choice' would ebb away, rather leaving it as a 'University of Cheap Choice'.