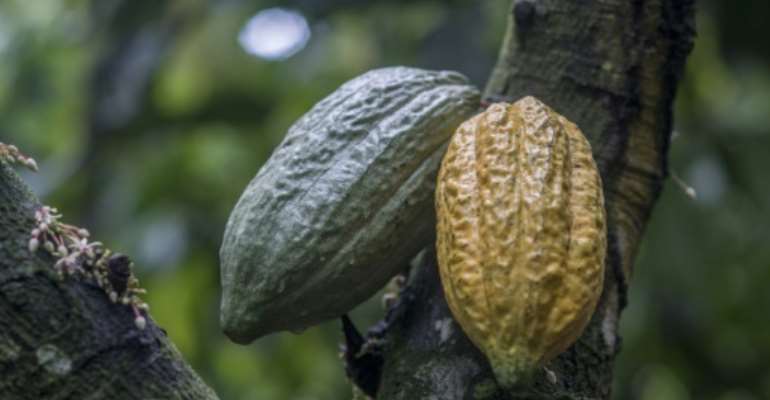 Two cocoa pods, which can each hold some 30 to 40 cocoa beans that are used to make chocolate. By CRISTINA ALDEHUELA (AFP/File)

Kwame Boadu was forced to abandon his cocoa plantation to work in Ghana's capital Accra, but when the government announced plans for a price floor he began dreaming of a return to his fields.

A higher guaranteed price for the crop means a cocoa farmer "can afford fertiliser, he can afford weedkiller, he can employ more labourers, so he can increase his production", he told AFP.

And moreover it would guarantee that farmers get more money when they increase output, the 34-year-old added.

Earlier this month key producers Ivory Coast and Ghana threatened to stop selling their production to buyers unwilling to meet a minimum price of $2,600 per tonne.

The two African nations -- which together account for 60 percent of the world's cocoa production -- want to end a situation where cocoa producers make only $6 billion in a global chocolate market worth around $100 billion.

The move sent world cocoa prices briefly above $2,500 per tonne, but they have since fallen back below that level.

"We don't have anything to sell apart from cocoa," said Alhaji Alhassan Bukari, who heads up Ghana's farmers' union.

A few entrepreneuring Ghanians are processing cocoa beans to make chocolate, instead of just exporting them. By CRISTINA ALDEHUELA (AFP/File)

"So if the government has thought about the farmers, they come together to fight for the farmers, we support them," he told AFP.

Cocoa is a key sector of the national economy, according to the Ghana Cocoa Board, both in terms of providing employment to around 800,000 families and generating revenue for the government's coffers.

Ghana's Vice President Mahamudu Bawumia said earlier this month at a meeting with farmers and buyers that Ghana and Ivory Coast made their proposal to ensure farmers get "a fair share of the wealth that the industry generates".

"A satisfactory price of cocoa beans will go a long way to complement the government's investments in rural infrastructure and improve the wellbeing of the communities," said Bawumia.

From cocoa to chocolate

But farmers aren't the only ones concerned by the discussion over cocoa prices.

While chocolate has long been a marginal product in Ghana, despite the country being a major producer of its primary ingredient, in recent years a new batch of chocolate makers has set up shop.

Selassie Atadika, the chocolatier at Midunu, a maker of handcrafted chocolates, says she has noticed more local chocolate on the shelves in Ghana's shops.

"I think in general there is more awareness, people are using it at more events and things like that so there is probably an increase in people's interest in buying chocolate."

Waste not: Scraping excess chocolate from a mold. By CRISTINA ALDEHUELA (AFP/File)

These local producers have an interest in cocoa prices, and fear a jump in prices could hurt their businesses.

But for those trying to develop chocolate as a product "issues remain, even if the price of cocoa beans does not change, the price of sugar, milk powder and electricity will still be a major influence in their capability to make the chocolate", she said.

One thing is clear for her, however: "If the (cocoa) price goes up it will have a negative impact on us."

But it isn't clear that the price floor will impact domestic producers as the proposal concerns exports, which come from the main harvest.

Moreover, they enjoy a subsidy on the purchase of beans from this harvest, according to the Ghana Cocoa Board.

"What would make an impact on domestic chocolate makers is if there was a loosening of regulations regarding who can sell and buy main crop beans, which would open opportunities for new domestic sourcing routes for cocoa," said Kristy Leissle, a cocoa industry expert and lecturer at the University of Washington Bothell.

A development which would benefit all is if more cocoa was processed in Ghana, capturing more of the value added in the industry.

"We need to add value in Ghana, so we can send the world's best products from here," said chocolatier Atadika.

It's a wrap. By CRISTINA ALDEHUELA (AFP)

"It will be maybe cheaper to make your chocolate in Ghana and ship it out," she said.

"So potentially it can mean more work, more white label chocolate that we can be doing for other companies. So I think it's encouraging for people in the industry."