Cocoa Farmers Need to Be Included in Industrial Ownership 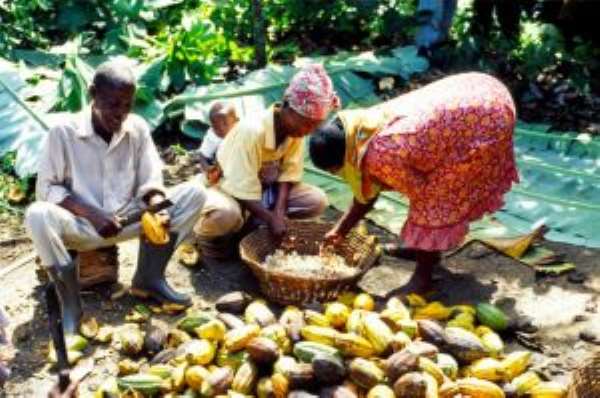 I was not very impressed with the announcement by Vice-President Mahamudu Bawumia that the Government of Ghana and that of la Cote d’Ivoire (The Ivory Coast) were liaising with stakeholders in the cocoa-value chain to ensure that cocoa farmers received fair market prices for their produce (See “Ghana, Cote D’Ivoire Committed to Getting Higher Prices for Cocoa Farmers – Bawumia” Modernghana.com 6/11/19). Not impressed because this is not the first time that cocoa producers in Ghana are hearing such talk from highly placed government officials and Ghanaian leaders. I am also quite certain that cocoa producers in the Ivory Coast have been hearing a similar story from their leaders and politicians ever since anyone can remember.

What makes this story at once irksome and boring is the fact that behind cheap and tawdry rhetoric, not much seems to have been done or capable of being done to translate such apparently well-intentioned rhetoric into effective initiatives. What needs to happen right now, at least at the value-chain source, as it were, is for the governments of both Ghana and the Ivory Coast, that claim to produce about 65-percent of exportable cocoa beans, to bring the primary cocoa producers into the manufacturing industry as owners and shareholders, instead of the continuous perpetuation of the sort of “monopsony,” or the monopolization of the supply side that has existed and persisted since the colonial era.

Indeed, at one point, there was widespread talk about making a decisive or complete shift from the mere exportation of dry cocoa beans to the exportation of cocoa powder, for example, in order to ensure a value-added increment in the producer-end price or prices for the primary product. That was way back in the 1980s and 90s. Since then, I don’t know whatever happened to this policy decision. At any rate, in terms of poverty alleviation, something quite significant could have since long been done by ensuring that the overwhelming bulk of the scholarships awarded to Ghanaian high school and college students went directly to the children and immediate relatives of cocoa farmers.

Unfortunately, long time ago, then Prime Minister Kwame Nkrumah, later President Nkrumah, decided that while cocoa farms were predominantly Akan-owned and southern Ghana-oriented, nevertheless, there existed a remarkably high percentage of non-Akan labor that made the cultivation and harvesting of this so-called cash crop perennially successful. Such thinking was practically realistic and intellectually sound, but it did not effectively resolve the fact that the primary owners of cocoa farms and producers of the same were being cavalierly denied their fair share of the profits that accrued from the value-chain source of the cocoa industry. Nkrumah proceeded, perhaps out of sheer spite for the largely Akuapem, Akyem, Asante and Bono/Brong producers of what Dr. JB Danquah once described as the “mainstay of Ghana’s economy,” to jampack the administrative, labor and clerical sides of the erstwhile Cocoa-Marketing Board, presently COCOBOD, with either Akan non-producers of cocoa or citizens and residents from the non-cocoa-producing parts of the country.

That was long before Ghana struck oil or “black gold” on its continental shelf. So it was rather absurd to hear many of the leaders from the present main opposition National Democratic Congress scandalously agitate for Ghana’s new-found oil industry to be managed and controlled by Ghanaian citizens, largely of Nkrumah’s Nzema ethnic descent who, by the way, had not constituted any significant percentage of the initial cocoa producers. It is also very significant to observe that the local component of oil discovery in Ghana has been predominantly Ghanaians of Akan descent. Dear Reader, please, don’t write back to inform yours truly of the fact of the Nzema also historically being of Akan descent. I am fully aware of this fact.

But, of course, what also struck me as being exceptionally odd about the news story being discussed here, had to do with the fact of the six powerful politicians who met to discuss the need for the lives of our cocoa farmers to be appreciably improved, economically, that is, not a single one of whom was a woman. Going by Nana Akufo-Addo’s own calculation, at least as presently reflected by the gender composition of his own cabinet, at the very least, two of the people who met to discuss the economic status of Ghanaian and Ivorian cocoa farmers ought to have been women. It is also significant to observe here that there are more women cocoa farmers in both Ghana and the Ivory Coast than there are men. A lot of challenges still need to be overcome here; or isn’t this the case?