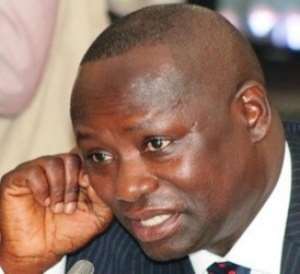 The Member of Parliament (MP) for Ellembelle, Emmanuel Armah Buah, has questioned the rationale behind persistent harassment of national chairman of opposition National Democratic Congress (NDC).

The arrest of Samuel Ofosu Ampofo, the opposition national chairman which was in connection with his alleged involvement in the recent kidnappings in the country, according to the security officials.

He was subsequently granted bail and due to honour another invitation on Thursday, June 13, 2019.

Reacting to these developments and the subsequent arrest of the national chairman, the former Minister for Petroleum, Emmanuel Armah Buah said the incessant harassment of Samuel Ofosu Ampofo by government could only amount to intimidation tactics deliberately calculated, and being executed to tame the leader of the NDC but that clandestine agenda will backfire.

"The continued harassment of the NDC party Chairman reached an unacceptable stage last night (11-6-19) when the Chairman was once again arrested and detained deep into the night. I began to wonder what the end game was, what exactly is the objective, is this intended to criminalize the Chairman and in turn the party," he intimated.

The lawmaker expressed worry that perhaps the government was not concerned about the security repercussions these harassments could cause the nation.

According to Kofi Buah, any attempt to push the NDC to the brinks of retaliation could plunge this country into total chaos which obviously must be avoided.

"Has anybody thought about the power of the largest opposition party and its ability to bring this country to its knees. What exactly has the Chairman done? Has anybody weighed his so called charges (trumped up) against the price we can possibly pay as a country?" he posited.

He therefore advised the Akufo-Addo government and especially security agencies to consider the sustained peace and tranquility being enjoyed in the country and desist from acts likely to jeopardize the peace of Ghanaians.

"The peace and stability of our dear country is priceless- this must guide the actions of those who have the privilege to exercise power on behalf of the good people of Ghana," he emphasised.