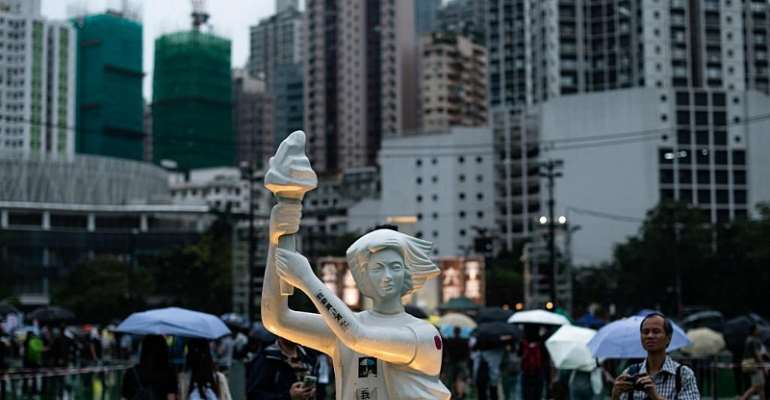 Today is the 30th anniversary of the Tiananmen Square massacre in Beijing. Hundreds, possibly thousands of people lost their lives when the army moved against student protestors. The event has been commemorated in Hong Kong, one of the few places in China where this can be done openly.

Hong Kong was a British colony until 1997, when the British government handed it over the Beijing.

The deal was that it would go on functioning quasi independently under a hybrid system that's called “One country, two systems”.

So, even if Beijing doesn't like it, it has to allow these protests, because that was the deal with the UK in 1997, when it signed the “Basic Law,” Hong Kong's mini constitution, article 27 of which states that “Hong Kong residents shall have freedom of speech, of the press and of publication; freedom of association, of assembly, of procession and of demonstration; and the right and freedom to form and join trade unions, and to strike.”

But over the decades, things have been changing.
“Year after year we hear that there is behind-the-scenes pressure from Beijing,” says Claudia Mo, a member of the part of Hong Kong's legislature that is directly elected.

“They tell the organisers, or people who are close to the organisers to forget about staging the events. But then Hong Kong people stand firm,” and the yearly commemorations take place anyway.

This year, apart from the traditional get-together in Victoria Park, there were kite-flying events, to remember times that people could freely go to Tiananmen Square to fly kites, and a marathon.

But it's not the 30th anniversary that will attract more people than usual, says Mo.

“We are fighting a Chinese extradition law which is going to put Hong Kong basically under Chinese law,” she says.

“And that goes against Beijing's “One country, two systems” formula that guarantees Hong Kong's semi-autonomy.

Because people in Hong Kong were fearful that a fair trial was impossible under the Chinese judiciary.

A fear that was deeply installed with the 1989 Tiananmen crackdown, which took place less than a decade before Hong Kong would change hands.

“It is supposed to be a safeguard, a firewall against this fear.

“But now the Hong Kong government, obviously at the behest of Beijing, is calling that a loophole in the law. And they try to prop it up. Which means that Hong Kong people could be subject to extradition to China when Beijing wants to,” says Mo.

In practice, this would mean, that anybody who is wanted by Beijing, including foreigners who live in or pass through the territory, may be deported if the Chinese authorities demand it, Mo says.

The Tiananmen commemorations in Hong Kong started at 20:00 local time with a candlelight vigil. The number of those taking part was estimated by organisers at one-hundred and eighty thousand. Police counted 37,000 participants.