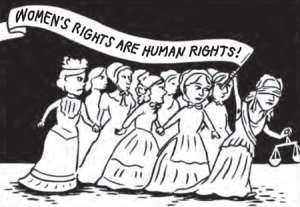 This article seeks to highlight the major weakness in the feminist advocacy for women empowerment and development thus a potential source of societal conflict. And therefore, recommend solutions on how we can erase such notions and move in a common ground towards development. Let us look at what the advocacy theory is about and the underlining debates concerning the gender politics.

Feminism according to our understanding is a range of political movements, ideologies, and social movements that share a common goal: to define, establish, and achieve the political, economic, personal, and social equality of the genders and I am hundred percent in support of plans, arguments and strategies intended to bring women to the forefront of politics, business and any other field.

It is very true that over the years, men have occupied very prominent positions in every society across the globe. The palace, presidential offices, ministerial positions just to mention a few. I believe that one major goal of feminists is to make sure that women will also find themselves occupying these positions. I have no problem with that at all. However, the fact that men have predominated over these offices over the years does not mean that men were born to occupy them. Therefore, the notion that women can do what men can do, which feminist popularly use when they are advocating for women empowerment and development should be reconsidered or restated.

They can say, as men can occupy prominent positions so can women, and for the fact that women can occupy prominent positions just as men, does not mean entirely that women can do what men can do in line with the natural abilities of a man. I believe the phrase ‘can do’ has its umbilical cord tied to the word ability. Ability is simply defined as ‘power or knowledge that makes you able to do something’ according to the long man dictionary, but more importantly, the same dictionary provided the synonyms for the word, ability.

They are skill and talent. For the purposes of this writing, I will want to stick to talent. What is talent according to the same dictionary? Talent is ‘a natural ability to do something.’ I just want you, dear reader, to pay attention to the word natural. Every human being is born with a natural ability to do something. Every child, every human being has the potential to become a minister, an MP or great person. However, it must also be noted that nature or God in his own incarnate wisdom gave certain abilities to men that he did not give to women and the vice versa is absolutely without an iota of lie.

I am a very strong advocate for women but if other feminists disagree with me, I would want to ask them a simple question. Does the notion ‘what men can do, women can do or do better’ implies that as men can impregnate women, women can also impregnate men or do it better? Even if my example does not make sense, I believe our society will be more politically healthy if we energize a more concerted effort to find out what men can differently do from women based on our biological differences. The notion of what men can do women can do is eating deep into the very wonderful foundation which God has created to train up children and destroying or tearing it apart, marriage.

I am not even advocating for men superiority over women, do not be confused. I am not also saying that all men including women are not born equal. For the fact that we are all born equal does not mean we can do the same things that is a fact. A woman can breast feed, a man cannot. Let us empower our women, and our young girls to aspire for prominent positions in the society, but if we fail to discover the uniqueness of women and men, and assume that all of them are the same or equal as in the word equal, we will tend up dividing ourselves instead of we been united.

The world has seen no peace in certain regions due to the absence of a common religion, racism, poverty and what have you. Let us not add another problem to our problems. Even in our schools, lady teachers who believe women can do what men can do turn around and call boys to do manual works leaving the girls. If a student boy refuses to do any work expecting that it should be shared equally between him and a student girl, what will you do as a teacher? What will you tell him after you have educated them on the notion that women can do what men can equally do?

To actually develop, we cannot be comparing our sexes and relating it to what we can or cannot do. We must give everyone the opportunity to serve, if one has not work before how do you expect him or her to have experience. A man can be a president and serve well or bad and so as a woman. We have over the years confine ourselves with all these notions yet we have not been able to settle on a common ground that, we can do similar works but naturally, there will be some difference to a larger extent.

I stand for the interest of all and together, we shall fight for the change that we always wanted. Culture is made by man and it can be unmade by same man, let us not discriminate because, doing that only brings destruction to both our minds and development. What would sideline and trying to differentiate between the sexes do to us, what do we seek to gain? Why do men love destructions so much? And what is the fear if women are motivated and wants to do what we can do?

It is evident that most women have occupied certain positions and delivered well than men and a typical example is what we did observe in Liberia during the time of Charles Taylor, he destroyed the state and a woman was able to restructure the state and made it a peaceful country. Is it amazing! We are humans and naturally we have weakness and always prone to make mistakes but we should not conclude someone mistakes for his or her inabilities.

Sometimes we are lazy because we have not just given the chance to do anything, we kill our dreams and potentials because we have decided not to seek help. Research shows that seeking help from different genders solves problems faster, amicably and diligently than doing it with same genders. This therefore gives the ground for both men and women to collaborate effectively to do a lot and the era of “men and women” who is more important than the other must be stopped.