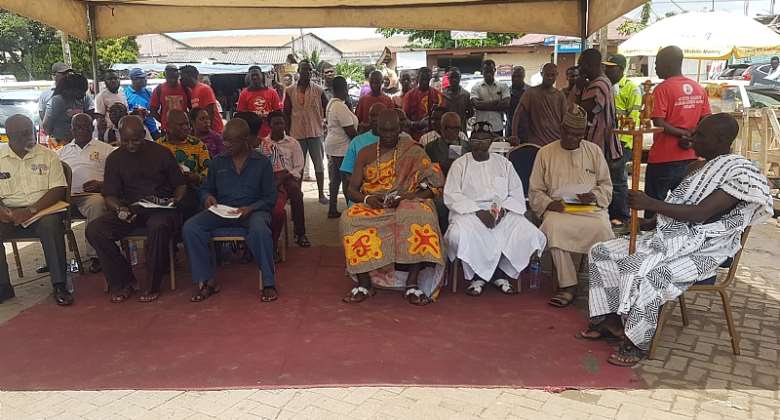 Jekora Ventures, a waste management company, has held a durbar on sanitation for residents of Adabraka-Garages, a community within the Korley Klottey Municipal Assembly (KKMA) of the Greater Accra region.

The one-day sensitisation programme was aimed among other things at educating residents and the public in general on the dangers of poor sanitary conditions.

Currently, Jekora Ventures is the first and only Ghanaian waste management company offering solid waste source segregation to its clients including recycling services.

The event was held under the auspices of Nii Tetteh Adjabeng II, Adabraka Mantse in collaboration with the National Commission For Civic Education (NCCE) dubbed: Education On Enforcement And Compliance Of Sanitation Bye-Laws.

Ing. Immanuel B. Nartey Tokoli, the Managing Director of Jekora Ventures in his address said the gathering was to enlighten the residents on the benefits of good sanitation.

According to him, Jekora Ventures collects about 6,000 metric-tonnes of waste every month within the Assembly.

Mr. Nartey-Tokoli gave the assurance that Jekora Ventures would train teachers and students to enable them to implement the waste separation modules and help the children imbibe it at an early age to make it easier in practice.

The director general of Korley Klottey municipal assembly Mr. Deey Kukubor added President Nana Addo Dankwa Akufo-Addo’s commitment of making Accra the cleanest city was of no without a doubt and, in the pursuit of that agenda, the KKMA had designed a strategy to tackle the sanitation issues in the Assembly.

Nii Tetteh Adjabeng II, Adabraka Mantse added that the environment has been faced with enormous sanitation challenges and called for collaboration between the public and private stakeholders to address the problem.

He expressed the hope that Jekora Ventures would continue to work closely with the Assembly and provide technical support and advisory services to enable the authorities to make the President’s dream of Accra as the cleanest city dream a reality.

Nii Mantse urged the residents to make the bins useful in order to reduce the waste in the Assembly.