Professors Akwasi Asabere-Ameyaw & Mawutor Avoke, To Face ‘Prosecution’ For Recruiting A Truck Driver As A Lecturer 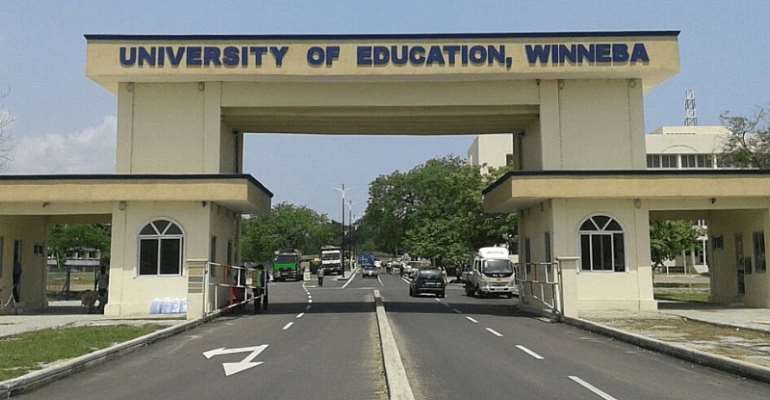 Ahmed Jinapor is a Prince to a controversial Paramount Skin in the Savannah Region; holds a PhD; is a Senior Lecturer; and an Associate Professor in-waiting. Jinapor’s titles surpass those of Okonkwo, the major character in ‘Things Fall Apart’ and those of the late Ugandan leader, Iddi Amin. Globally, Jinapor sits at the top of all title holders.

Right thinking members of society have largely acknowledged the feats chalked by Ahmed Jinapor, and accordingly urge him to fight at all cost, including lying to his students that he has been sacked by his employer, so that the said students can join in demonstrations and call for his farcical reinstatement; mount platforms and incite riotous students and other hired unemployed yobs to destroy both public and private property; close down a public university; and continue to draw his salary without any shred of remorse; all in an effort to add more titles to his collections. Kudos, Jinapor!!

Ahmed Jinapor erroneously stated on a Joy News programme on Thursday 28th March 2019 that Alhassan Salifu Bawah, wasted precious time and resources to study for a first degree. These are the delusions of someone who appear to be high on marijuana (wee), and so should not be taken serious. Alhassan Salifu Bawah has never attended school, so how could he have acquired a first degree?

After leaving the British Army, Alhassan Salifu Bawah went on to become a truck driver in the UK, so where did he get the first degree from?

A section of medical officers are of the opinion that Jinapor’s statement was made during a ‘lucid interval’, and so should be treated with the contempt it deserves.

It has to be put on record that Alhassan Salifu Bawah, was recruited as a lecturer at the University of Education, Winneba (UEW), by Prof. Akwasi Asabere-Ameyaw in 2014. Alhassan Salifu Bawah was supposed to hold a minimum of a Masters degree in his area of specialization before being considered for appointment. According to Ahmed Jinapor, Prof. Akwasi Asabere-Ameyaw, overlooked this requirement.

All hail Alhassan Salifu Bawah for casting the most potent magical spell on the entire management of UEW for recruiting him without any educational qualifications in 2014!

Subsequently, his appointment was confirmed in 2016 by Prof. Mawutor Avoke. Prior to this confirmation, Alhassan Salifu Bawah was supposed to have completed a Post Graduate Diploma in Teaching & Learning in Higher Education (PGDLE), which in the words of Ahmed Jinapor, Alhassan Salifu Bawah failed to undertake. No wonder Prof. Avoke has been dismissed as the Vice-Chancellor (VC) of the University of Education, Winneba (UEW). If Prof. Avoke could not even do basic due diligence in the confirmation of one lecturer, then what else could he have done right?

I, Alhassan Salifu Bawah, do hereby call on the National Council for Tertiary Education (NCTE), to investigate the statement of Ahmed Jinapor and accordingly prosecute all persons who maybe found to have circumvented national laws, in my recruitment.

On the other hand, if Ahmed Jinapor’s statement is found to be false, he should be made to face the full rigors of the law for bringing the names of the two Professors into disrepute. He who alleges, MUST prove!!