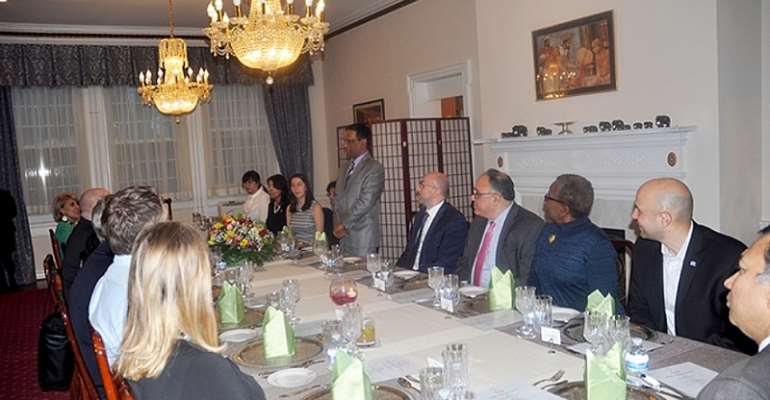 Embassy of Sri Lanka in Washington, DC had the distinct pleasure of hosting the media preview dinner of the 11th International Embassy Chef Challenge (ECC) at the Sri Lanka Residence in Washington DC on 20th March 2019.

The ECC is an international annual culinary feature event, jointly hosted by Events DC and Trade Centre Management Associates (TCMA) exclusively for the diplomatic community in Washington, DC which has become a major attraction and platform to promote culinary diplomacy among the likeminded.

The 11th ECC which is scheduled to be held at the Ronald Reagan Building and International Trade Centre on April 2, 2019 will feature authentic cuisine and culinary delights presented by over 30 diplomatic missions based in Washington DC.

The curtain raiser and media preview dinner hosted by Chargé d’Affaires, Sarath Dissanayake was a unique and rare opportunity for Sri Lanka. The Chargé d’ Affaires of the Georgian Embassy, Giorgi Tsikolia joined the gathering as co-host. Among the invited guests in attendance at the dinner included event organizers namely, Events DC, and TCMA. Sponsors such as Cultural Tourism, Pepsi, Chase together with media partners namely, DC Refined, Washingtonian, Washington Diplomat, Racked DC/BizBash, Thrillist, and Oral Ofori of TheAfricanDream.net were there to provide coverage.

Delivering his special remarks, Chargé d’Affaires, Sarath Dissanayake welcomed the guests and appreciated their contribution and support for the event for 10 long years and making it an annual feature in the diplomatic calendar. He credited the event organizers, sponsors, and media partners for its success and popularity today, thus becoming a much sought after annual culinary feature among the Washington based diplomatic community.

On behalf of Sri Lanka, Chargé Dissanayake took the opportunity to convey his best wishes to the valued sponsors, media partners, wellwishers, and chefs success in the 11th Embassy Chef Challenge.

He then invited the guests to taste and experience Sri Lankan dishes and culinary delights prepared by Sri Lankan Chefs which included hoppers, kottu, fish cutlets, jaggery pudding and other exquisite dishes unique to Sri Lanka.

In closing, Events DC Director of Special Events, Stephen Ball delivered closing remarks and a vote of thanks in which he, on behalf of the event organizers, sponsors, and media representatives conveyed his sincere thanks to the Sri Lankan Chargé for hosting the Media Preview Dinner with an exquisite array of dishes and Sri Lankan tea.

The guests were presented with a pack of gift tea by the Embassy. The Commercial Section of the Embassy coordinated all arrangements in this regard.