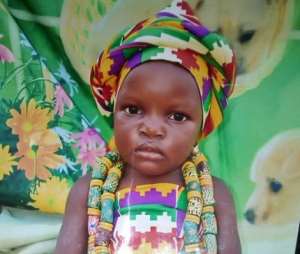 We broke the story about little Rafiya Mohammed aged just 16 months after she went missing expecting that she would be found alive. Her mother who came visiting her uncle, left her outside their house at Teshie briefly.

By the time she returned, the kid was gone; stolen by somebody. A couple of days after she went missing, her dead body was found in human fecal matter in a public place of convenience.

Why should somebody be so wicked as to commit such an atrocity on an innocent child? The mood of the deceased's lactating mother who had left the kid to go and pray can only be imagined at this time.

We are pleased with the response of the National Disaster Management Organisation (NADMO) officials in Teshie who moved in quickly to search for the kid and to move to the site where she was dumped upon receiving information to that effect. The local police also did very well by being dutiful.

Although the grandfather of the kid asked that the remains be released to the family for burial, that was not possible because procedure must be followed given the criminality involved.

It would be important, for instance, to determine the motive for the abduction and eventual murder of the baby. This can only be done after a post mortem. It would be interesting to find out whether an organ of the kid was removed and for what purpose.

This being the first time, for instance, that this crime is being committed in the area, it would be important for residents to watch out for a possible repeat. If there is, that would point at a worrying pattern so the necessary precautions and action can be taken.

We think that parents, mothers especially, must be mindful about the security of their babies. The stealing of babies is facilitated when a mother commits a small blunder such as leaving the baby alone. Why should a mother leave a toddler alone without a family member around to take care of the baby until her return?

The case of the toddler under review is, especially sad. We call on the CID to expedite action on the search for the culprit who could be within the community where the crime occurred.

Residents of the area should support the CID in the search because the latter can only succeed in the search only when they receive the necessary support through information from the public. No information is too small in such searches. The professionals who are the detectives need such information to track down the killer who could be ready to pounce on more kids. Who knows? Perhaps something else was responsible for the sad occurrence.