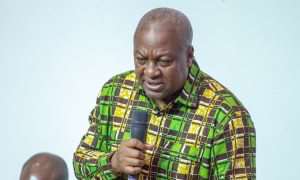 He said claims that he issued Mr. Appiah Mensah the passport was mere propaganda aimed at smearing his person and causing public disaffection towards him.

John Mahama noted that if Mr. Appiah Mensah indeed has a diplomatic passport as being circulated on social media, it must have been issued to him under the Akufo-Addo government.

Addressing delegates and party faithful in Koforidua as part of his Eastern Regional tour ahead of the NDC’s presidential primaries, he also denied claims that he and his wife, Lordina Mahama had their investments locked up in NAM1’s Menzgold Company Limited.

The company has not been able to pay up the investments of its many customers over the past four months, and has failed to honour its payment schedules.

It however continues to give assurances that it will pay all customers their monies.

As the many customers of the company continue to grief over fears they cannot retrieve their funds , a political twist has been given to the situation with members of the NDC and the NPP accusing each other of being responsible for the development.

The NDC’s Director of Communications, Sammy Gyamfi on Wednesday said the government gave Menzgold boss, Nana Appiah Mensah due to recognition and propped up his reputation that enabled him to build public trust and get many more people to invest with Menzgold which some now describe as a Ponzi scheme.

The NPP also among various communications claim John Mahama and other officials in the previous government either invested or benefited from the largess of the now beleaguered businessman.

But John Mahama has denied the claim.

According to Mahama, the New Patriotic Party administration is trying to drag his name into disrepute.

“For the Menzgold issues I do not want to comment on it even though the NPP government is trying hard to drag my name into their issues. I want all Ghanaians to exercise patience as the real truth behind the Menzgold brouhaha unfolds… They say I have money locked up with Menzgold, my wife also same and Asiedu Nketiah too has money there but these are all lies being peddled by the government, all the issues surrounding Menzgold are now been revealed one after the other so we should all be patient and remain calm. Few days ago our youth organizer gave some explosive insights when he spoke on the Menzgold issue so I want you all to remain calm and do not say anything that will later be twisted and attributed to you,” he told the party supporters.