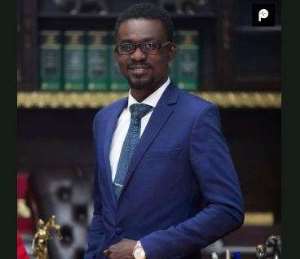 Lawyer for some of the indebted Customers of Menzgold Ghana Limited Lawyer Ralph Poku Adusei is warning the Chief Executive of the company to be measured in his public utterances.

The CEO Nana Appiah Mensah aka NAM1on Monday took to the press justifying the legitimacy of his gold trading firm which has been shut down for operating illegally.

Mr Appiah Mensah also laid a demand on government to unfreeze his bank accounts, support him retrieve 39 million dollars from his Dubai Business partners and direct his firm to the right regulatory body to continue his operations which he describes as innovative...

Lawyer Poku Adusei insists his comments could be interpreted as prejudicial to the case in court and could land him stiffer punishments if he is found guilty of the charges levelled against him.

Speaking to host Julius Caesar Anadem on the Ultimate Breakfast Show, he pointed out, “I will advise him that since the matter is in court, these comments that have the tendency of jeopardizing or prejudicing the prosecution of the matter should be desisted from.”

“Trial hasn’t commenced and if he should jump into the facts and what is expected to turn out at the trial, then he is more or less not helping himself because at the end of the day, he is the one standing trial.”

“Even though the constitution provides that he is presumed innocent until proven otherwise; I will entreat him to tread cautiously in exercising his freedoms of speech because at the end of the day, it is him who is facing trial and when you look at the charges that have been levelled against him and the quantum of money involved, potentially if he should suffer a conviction sentencing could be severe,” he pointed out.

Two of his companies — Brew Marketing Consult and Menzgold Ghana Limited — represented by him, have each been charged with defrauding by false pretence, contrary to sections 20 (1) and 13 (1) of the Criminal Offences Act, 1960 (Act 29).

The two companies have also been charged with carrying out a deposit-taking business without licence, contrary to Section 6 (1) of Act 930.