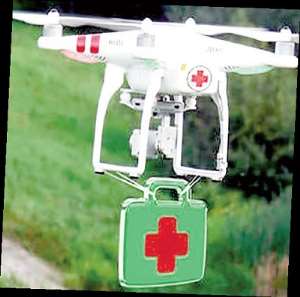 It was at the 2018 Annual Health Summit held in Accra that Vice President Alhaji Dr. Mahamudu Bawumia made the revelation; Ghana will soon start using drones in the emergency delivery of blood and essential medicine supplies to remote areas of the country.

“…We are looking at innovative ways to deliver blood supplies as well as essential medicines to remote areas,” he said.

“As the rains come in, some areas are going to be cut off… Do we allow mothers to die because we can't have blood supplies or essential medicines?” he added, justifying the move.

All things being equal, the vice president predicted the signing of a Memorandum of Understanding (MoU) by the middle of the year; moving Ghana up to the rank of the likes of Rwanda who is already using the technology to deliver blood supplies and essential medicines. “So we are going to do that this year,” he stated.

So as planned, the Ministry of Health, after due diligence and approval from the Public Procurement Authority, signed the $12m contract between the government and Zipline International Incorporated through sole-sourcing for the operation of unmanned aerial vehicles (UAVs), known as drones, to deliver medical supplies to underserved areas in the country.

Per the content of the agreement, Zipline will set up four distribution centres in four regions of Ghana, which will initially run on pilot basis for four years.

The Ministry of Health will secure supplies of blood, vaccines and other essential medical products and send them to these centres for Zipline to stock on the government's behalf.

When they run out, Zipline will inform the government, which must restock them as promptly as it can.

Thereafter, within an 80 kilometres radius of that distribution centre, enrolled district hospitals can place an order by SMS or WhatsApp for a delivery when they need it, and Zipline would deliver within four hours for normal requests and up to one hour for daytime emergency requests.

When a request comes from an enrolled clinic or hospital, Zipline would load a programmed drone (drones have a fixed route which cannot be amended once in flight) with the item and send over the drone. 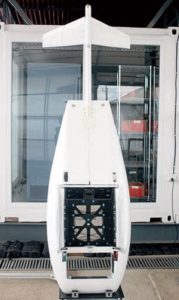 Upon arrival, the drone hovers over a field lot and drop the package from 20 feet down. The health workers will pick up the package, test to confirm sound condition and take it inside for use.

Monsoon-level rains and strong winds create conditions under which Zipline is excused from fulfilling the orders.

The GMA, while praising the drone idea, asked government to strengthen all areas of medical health by providing functional equipment to provide the right medical care.

“Well, for us as an association, on countless occasions, we have bemoaned the state of emergency medical service in the country, so if efforts are being made by the government to ensure we strengthen that aspect of our healthcare delivery, then we say kudos,” General Secretary of the GMA, Dr. Justice Yankson, said.

The next stage was for the representatives of Ghanaians to approve the contract in parliament but the final vote on the agreement was deferred last Monday, with the minority raising issues with the agreement.

The First Deputy Speaker of Parliament, Joseph Osei Owusu, explained that “there are outstanding regulatory approvals for compliance with the law before the House takes the decision, and the minister seems to agree with me.”

However, the Minority Spokesperson on Finance, Cassiel Ato Forson, said the cost of operating the services would cost the state $145, 000 monthly at each distribution centre.

The Minority Spokesperson on Health, Joseph Yieleh Chireh, also believed the agreement was in the first place a misplaced priority.

The Wa West MP indicated that the amount of money that would be spent on the project could have been used to provide healthcare services for persons in deprived communities like the project sought to address.

He said the challenges Ghana was facing in its health sector don't need drones to be addressed.

“People are dying not because there are no drones to deliver the medical supplies. They are dying because the supplies aren't available in the first place…” he said.

The Wa West MP indicated that the amount of money that would be spent on this project could have been used to provide healthcare services for persons in deprived communities.

Validating the agreement, Director General of the Ghana Health Service (GHS), Dr. Anthony Nsiah-Asare, described the drone delivery of medical supplies as the most efficient and cost-effective means of reaching under-served areas in the country.

He stated that the use of drone technology to deliver emergency services fits perfectly into government's plan of achieving access to Universal Health Coverage (UHC) in the country.

The Vice Chair of Parliament's Health Select Committee, Nana Ayew Afriyie, also justified the agreement. He said it would be important in tackling maternal mortality under the Sustainable Development Goals (SDGs), which is a key priority area for Ghana.

Explaining further, he opined that the cost per centre is actually calculated based on the number of deliveries that every centre is making.

“This is not a lease agreement. We are neither buying nor leasing the equipment, this is a service agreement. Essentially it is akin to a transportation service. It's like a taxi that's taking you from Point A to Point B; we're not buying the infrastructure.”

Policy think tank, IMANI Africa, although enthused by government's plan to fly blood and other essential medical supplies via drone technology, said in a statement that it would not do much to the country's health sector.

According to IMANI, “The Ghana Health Service – Fly Zipline Ghana drone health supplies delivery programme is novel, but the current strategy will end up improving nothing about our health system if care is not taken.”

IMANI Africa believes the move may have a huge impact on the country's health service as a whole only if “government rethinks the strategy” else it would “become another example of money poured down the drain.”

It urged the government to withdraw the contract from parliament and replace it with an amended one devoid of some controversial clauses.

Giving evidence for their call, IMANI Africa said the Zipline programme is a perfect public policy analysis issue requiring the capacity to blend insights from many disciplines in order to be able to judge if a project is indeed in the public interest.

Many discussants of the Zipline case have been quick to remind everyone that Zipline already operates in Rwanda and Tanzania, and therefore that the service is well-proven.

The policy think tank, however, highlighted that Ghana cannot rely on Zipline's track record in Rwanda because the public debates that would have surfaced important performance information simply don't happen in the way they happen elsewhere.

The statement further averred that its national blood management system has already seen the kind of reforms, including nearly 100 per cent voluntary donor compliance that should make a regularly scheduled drone service useful in certain outlying health centres.

“Rwanda has augmented the district level fleet for medical distribution alone with more than 30 trucks. We have struggled to hit even 15 trucks for the national to regional distribution fleet,” the statement read.

It further said Tanzania had decided to launch a small pilot of Zipline in the Lake Victoria area to gather more data to resolve certain contractual difficulties that have delayed the rollout of the project for many months.

“This is a wise approach.There could be a small, complementary, role for drones in the management of extreme emergency stock-outs. Say, during a localised epidemic, after a major accident, or following a flooding situation.

There is also some econometric modelling that shows that for highly expensive products with very low weight-to-dosage ratios, drone delivery premiums could come down significantly making the concept viable for those particular products,” IMANI said.

It further stated that Ghana's national list of essential medicines, which are generally provided free of charge or usually available at public health facilities at reasonable prices, has only a few of such high value – low weight medicines.

“Drone delivery in its current configuration, with zero inventory management and payments systems integration, cannot work in such a context.

We do not dispute that drone deliveries, WHEN PROPERLY DESIGNED, could plug some very well-defined gaps in specific corners of the country for narrow emergency needs.