3 civilians killed in attack on UN contractor in Mali 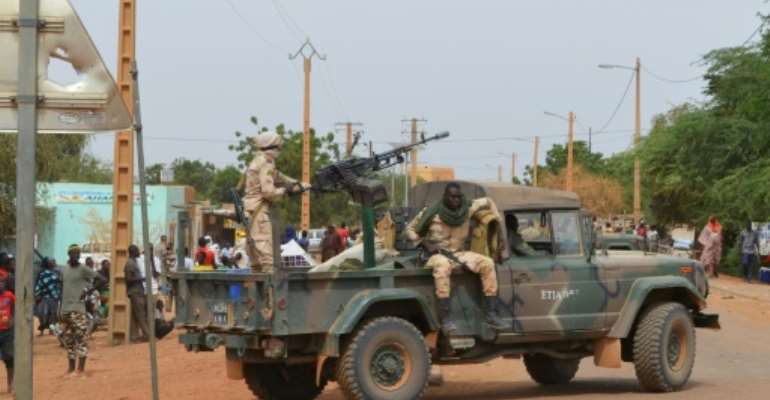 Mali has been struggling to return to stability after Islamist extremists took control of the north in early 2012. By PHILIPPE DESMAZES (AFP/File)

At least three Malian civilians were killed and four foreigners working for a UN-contracted mine-clearing operation wounded in a suicide attack Monday in the country's violence-hit north, the security ministry and other official sources said.

The attack, claimed by a group linked to Al-Qaeda, took place in the city of Gao at around 8:00 pm (2000 GMT), according to a ministry statement.

"A loaded 4x4 vehicle exploded in the vicinity of a residential complex," the ministry said, adding that two others were wounded in the blast, which also damaged surrounding homes.

Mali has been struggling to return to stability after Islamist extremists linked to Al-Qaeda jihadists took control of the north in early 2012, prompting a military intervention by France.

The extremists were routed in the French operation in 2013 but large stretches of the landlocked African state remain out of government control.

A local official said at least two Malian passers-by who lived close to the targeted building had died in the latest attack.

"Two Cambodians, a South African and a Zimbabwean working for an organisation subcontracted by UNMAS (the UN's mine-clearing operation) were wounded on Monday in a terrorist attack in Gao," a Western diplomatic source told AFP.

The assault was claimed by the Group to Support Islam and Muslims (GSIM), a fusion of three Malian jihadist groups allied with Al-Qaeda.

Malian and international security forces have been mobilised following the "tragic incident", the security ministry said.

The attack came as French Defence Minister Florence Parly and German counterpart Ursula von der Leyen met in the capital Bamako on Monday to discuss Mali's troubled peace accord and a planned five-nation anti-terror force for the Sahel.