Arguing For Or Against Proposed Ghana’s National Cathedral 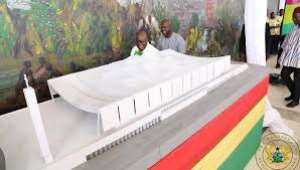 The proposal by President Nana Addo Dankwah Akufo Addo to build a national cathedral seemed like a passing fantasy. No figures have been discussed in public. However it appears the die is cast, as huge million dollars worth of buildings in Cantonments area are reported to be in line to be pulled down to build this Cathedral!

Democratic leadership demands strong institutions to work and a sensitivity of leaders to the wishes of tax-paying public.

It is hard to argue against anything a typical African leader, elected or with the gun, desires to build! A typical joke during the first Republic was from the late flamboyant Minister Krobo Edusei who was reported to have told the late Dr. Kofi Busia (the second President in the 2nd Republic) that what he was saying made a lot of sense but they listen but will not take it.

When Kwame Nkrumah decided to build more Universities besides Legon, and extend rural roads, build district hospitals and clinics, hundreds of secondary and primary schools, hundreds of factories and State Hotels, the Akosombo Dam, Tema Oil refinery and township, there were many who argued that Ghana did not have the money and hence should have waited!

When Nkrumah was finally overthrown in 1966, the opposition and proponents of do-nothing politics closed down the factories including those manufacturing paper, toilet roll, cutlasses, cocoa jute bags, soap and detergents and even drugs the sick needed and need today! Libraries were not sustained and so were zoos and many public parks closed down.

It was so sad for some of us growing up in Secondary School at the time to watch telephone wires cut down with no effort to repair and even community weeding in towns and water works all allowed to break down!

It has been over 60 years and history will not forget that the current President’s NPP party is an upshoot of the same party that stood aside and participated in destroying or not continuing anything our first leader built, including the highways, Conference Center and factories that were the core essence of Ghana’s future and livelihood and employment for hundreds of thousands of our fellow adult citizens!

I am sure the Ministers, as well as our President, are aware of our boys risking their lives to cross the Sahara desert and the Mediterranean ocean to seek employment in Europe!

It will be very hard for any educated and civilised African to argue against building of some national monuments that future generations will treasure! No! That is not the point! The point is the self-serving megalomaniac thinking of our Ghanaian leaders! President Kufuor took loans of about $2.3 Billion to build Ghana water supply system and never completed them. Before then Chairman and later President Jerry Rawlings Government had taken a loan of $2.1 Billion for building highways, defined as asphalt-concrete highways in the 1989-1992 era. The Accra-Kumasi highway, the most travelled in Ghana between the two largest cities, built in 1990, were all torn apart and filled with potholes by 1992!

Nobody was held accountable for this shoddy work in 1992, nor was Kufuor’s water works probed. President Kufuor instead felt he had done so well for Ghana he ordered $3.6 million worth of gold chains and created an award, giving the biggest award to himself!

Despite all these talk of revolution in the 1980s, it was not long before the appetite for the most expensive V8, the Toyota Landcruiser, became the favorite toy of politicians! No limit was placed on spending on the so-called revolutionary leadership, while libraries and public parks in Ghana were all closed down and some schools in rural Ghana lacked even buildings!

ROYALTY-THINKING:
The royalty thinking and behavior where Ghanaian elected leaders feel they can neglect the wishes and needs of the people of Ghana, with only a reported 58 Ambulance vehicles for the whole nation whereas the President travels around the country with en entourage of 45 luxury vehicles, each estimated $80,000 to $100,000, is what we are talking about!

Do the people of Ghana pay taxes for personal grandiose visions of the men we elect? Sure free education is a viable social equalizing necessity and most can agree.

However has the President bothered to examine the $267 million hospital at Legon and a children’s ward at Kumasi KATH left uncompleted for years?

- Has the President thought of the many schools that do not have water and the libraries around the county that have been closed for years?

- Does President Nana Addo Dankwah Akufo Addo like the ugly stinky open gutters he sees around our cities and towns, and the fact that an estimated 100,000 people die of malaria and more of cholera and other diseases attributed to these filthy open sewage and environment?

Prof. Chika Okeke-Agulu’s article and argument in favor of Ghana building the National Cathedral seems to be misplaced. Nothing will give this writer and many of us as much pride as a monument future generations will remember, and we can all be proud of! However we ask the President to look back in the mirror of history and ask why major hotels and structures including pharmaceutical companies, automobile assembly plants, and even Motorways were all abandoned by his uncles and family that he feels so proud today to project in a good light?

And please don’t get me wrong. I love the fact that it is to be designed and built by the famous Ghanaian-British architect David Adjaye. I love the fact that this Cathedral may last beyond our lifetime. I am not against building a monument. Africa needs to leave something others will be proud of! However, what guarantee do we have that if the President spends our $100 million of our tax money building this National Cathedral it will be completed if he loses the 2020 election?

Has he sold the idea of the cathedral to the whole nation including some of us silent taxpayers even living half the time outside Ghana but with our lifelong investment capital in Ghana? Merely announcing this in a speech or two does not cut it. No!!

In a democracy leaders try to respect the views of the people who contribute taxes to support governments.