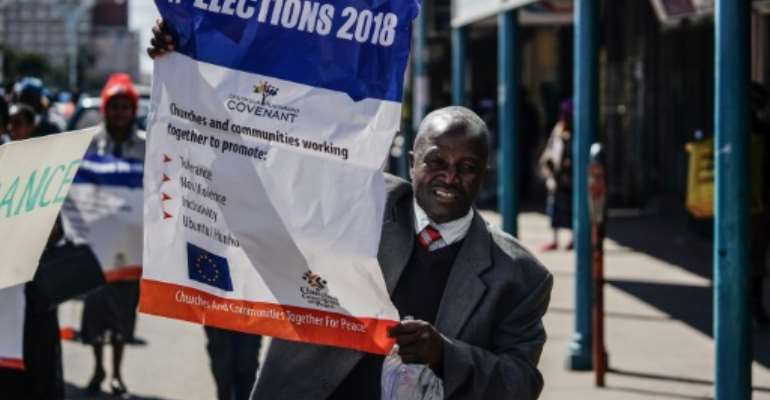 A demonstrator holds a banner as he takes part in a march for peace, staged by Zimbabwean churches on Thursday. By ZINYANGE AUNTONY (AFP)

President Emmerson Mnangagwa has only a narrow lead over opposition leader Nelson Chamisa ahead of Zimbabwe's landmark elections on July 30, according to a poll released Friday.

The Afrobarometer poll put Mnangagwa on 40 percent and Chamisa on 37 percent and said there was now a "reasonable possibility" the opposition champion could win after a spurt in popularity.

Mnangagwa's advantage narrowed to three percentage points from 11 points in early May.

With less than two weeks to go before Zimbabwe's first elections since the ouster of Robert Mugabe, about a fifth of voters still are undecided, the poll said.

The survey's 2,400 respondents expressed concern over disputed count or the military stepping in, it added.

Previous elections in Zimbabwe were marred by fraud, intimidation and violence during Mugabe's 37-year rule, and the accuracy of polling in the country is uncertain.

The election pits Mnangagwa, of the ruling ZANU-PF party, against Chamisa of the opposition MDC party.

"The MDC would have to obtain about two-thirds of undeclared votes in order to secure a first-round victory in the presidential election," Afrobarometer said.

"In our opinion, this prospect lies within the realm of reasonable possibility."

It added that most Zimbabweans still thought Mnangagwa would emerge victorious.

More than four in 10 people expressed concern that incorrect election results would be announced, that the armed forces would not respect the result or that post-election violence would occur.

Campaigning has been more open and less violent than under Mugabe, respondents said.

A run-off vote is scheduled for September 8 if no candidate wins at least 50 percent plus one of the vote in the first round.