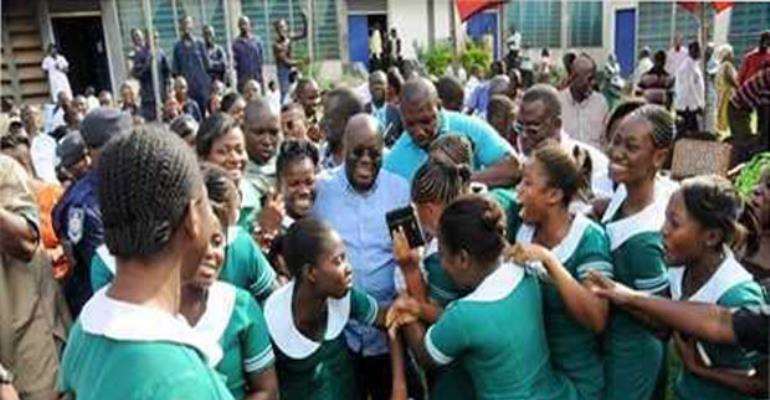 President Nana Akufo Addo has announced that beginning 2018/2019 academic year which is coming September, all public Colleges of Education will be upgraded into University Colleges

According to him, through an affiliation with University of Cape Coast [UCC], new entrants will pursue a 4-year Bachelor of Education (B.Ed) degree program and that “a first degree will become the minimum requirement for teaching at any level of our education system.”

Between the President and a Deputy Ministers for Education, Mrs. Barbara Asher Ayisi, I have heard this announcement about five times already.

What the conversion of the Colleges of Education to University Colleges normally means is that the teacher training allowance will be scrapped while students especially those that are financially handicapped, requiring support will access student loans from SLTF. Unless Government for fear of exposure beats a retreat today to claim this conversion is a special case which will witness extension of an unwieldy 3-year trainee allowance payment to a 4-year one.

The reason for the conversion which Government is quiet over, reliable sources say is due to general liquidity issues. Govt has a huge headache each year coughing up Gh480million to pay teacher and nursing trainee allowances, leading to unimaginable delay, causing trainees hardship.

Your Health Minister came on his rounds on the 29th of March, 2018 and promised these monies would be paid within two weeks from the time he visited, but as it stands not even a penny has been paid to any student for the past 4 months. This wasn’t what we voted for, Mr. President! We trusted you to deliver on your ‘Allawa’ promise. Do not forget we are part of the largest numbers who elected you during the 2016 elections simply because we trusted and bought into your policies. If you’ve forgotten, let’s remind you! No disappointments!”

Today, in Government’s own secret admission, the budget for the trainee allowance could have been channeled into more important areas; $1million per constituency, One village One dam, One District One factory, One school child per chocolate, free SHS among others.

Free SHS for instance is estimated by experts to cost Gh600million a term [Gh1.8billion, a year] but the Government in its 2017 budget voted a paltry Gh400million for the entire year. From that budget, according to Energy Minister at OTC in Houston-USA, only Gh198million [representing 33% of the budget per term] was realized for the challenge plagued program last academic year.

Meanwhile the second cohort of free SHS is expected in school this academic year which is only 2 months away, thereby putting Government under enormous pressure for lack of resources.

The glaring attempt to renege on promises including trainee allowance payment, jobs for the youths, nurses and others, $1million per constituency among others proves the deceitful 2016 campaign of the Akufo Addo/Dr Bawumia team.

As an outcome, GNMTA, a group of health professionals who met Dr Bawumia about 2 months ago on jobs, in a press release issued, expressed shock that the Vice President would claim he many times tried without success to reach Finance Minister, Ken Ofori Attah over the matter.

As if the deceit testament is not enough, Dr Bawumia just 2 weeks ago was shamefully caught seeking to hoodwink the unsuspecting public on a non-existent $1.3million AfDB funded 150-bed capacity hospital whose exact location in Accra was known to only him.

Days after, he surfaced to seek refuge in the Ofankor Health Centre, a facility which is not 150 - bed capacity as the one meant. It also emerged that the recent hospital funded by AfDB was the 120-bed Tarkwa Municipal Hospital in 2013 which cost $23.2million. A VEEP we have who for the countless misleading comments and deliberate deceit earned the name “Dr Bawuliar.”

The most appropriate response yet to VEEP, is to try to put up a 150-bed facility at $1.3million.

He and his boss have become a butt of cruel jokes as videos; tweets; etc of their deceptive utterances in 2016 gained unimaginable currency on social and mainstream media. How sad!

H.E. John Mahama’s Govt policy to swap trainee allowances with a loan scheme which the NPP vehemently opposed during the 2016 campaign was after all for very good reasons which among other things saw 60% increase in student enrolment and offered an opportunity to expand infrastructure generally in education but particularly in the Colleges of Education.

Now that the empty but extremely noisy Akufo Addo/Dr Bawumia Government is seeking to beat a retreat on trainee allowance payment, rather than springing it upon us, shouldn’t they in advance announce the scrapping but that to be preceded by an apology to Ghanaians and the John Mahama Govt? That will be most appropriate.

God bless our homeland Ghana and keep exposing the unrepentant deceitful ones!!!