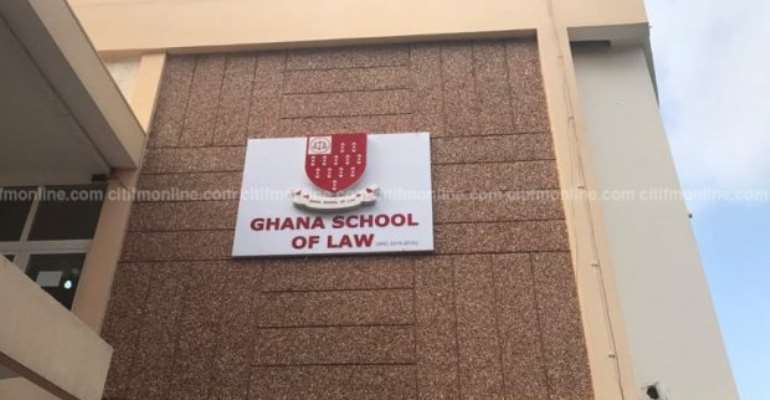 The Student's Representative Council [SRC] of the Ghana School of Law, has called for the school's Independent Examinations Board to be scrapped, describing it as a threat to legal education in Ghana, after only 91 of the over 500 students passed the May exams in 2017.

Protocol dictates that these students re-sit the exams, but the SRC has demanded that the results are scrapped, to allow the students to proceed with their six-month internship in March.

“Tentatively, the statistics we have point to the fact that out of the over 500 students who sat for the exams, only 91 students passed in all 10 courses,” the school’s SRC President, Samuel Gyamfi told Citi News.

He added that almost 300 students are to repeat the entire course, whilst 17o students would have to be referred.

Describing the failures as “unprecedented”, Mr. Gyamfi said the demands of the Council were in service of future student batches.

“We are making this point not because we have failed. Some of us have passed. Some executives have passed. But we are doing this for posterity, for those who will come after us so that the systems are improved and corrected, and sad occurrences like this averted.”

Lectures must set their own questions Mr. Gyamfi further advised the school to revert to the previous system of examining students, where lecturers assessed their own students.

“Now the lecturers who teach students will set questions and mark because we have the best lecturers in Ghana, with regards to the law and the kind of courses they teach. There is no reason why lecturers should not be the once assessing the students they teach.”

“Sometimes if the person marking is the one who taught the students, it becomes really difficult evaluating the answer the student has provided in his answer booklet correctly. So it is important that they are mindful and take into consideration all these things and revert to the old system. All the best lawyers we have in the country today: Martin Amidu, Ace Ankomah, Thaddeus Sory are products of the old system,” he said.

Fight over admissions These calls come in the midst of the tensions between students and the Ghana Legal Council over the Legal Profession Regulations LI before Parliament.

A group calling itself the Concerned Law Students, has threatened to seek redress at the Supreme Court if Parliament fails to withdraw the controversial Legal Profession Regulation.

The Association of Law Students has also petitioned President Nana Akufo-Addo over the matter.

The regulation, which will determine qualifications procedure into the Ghana School of Law, has been met with fierce resistance from the law students.

The students have described the LI as a deliberate attempt by the council to frustrate them in violation of their rights.

But the General Legal Council, which oversees legal education in Ghana, has argued that the exams and interviews are to ensure higher standards in legal education.