Generations Must Know: How NDC Shattered Ghana’s Dreams (I) 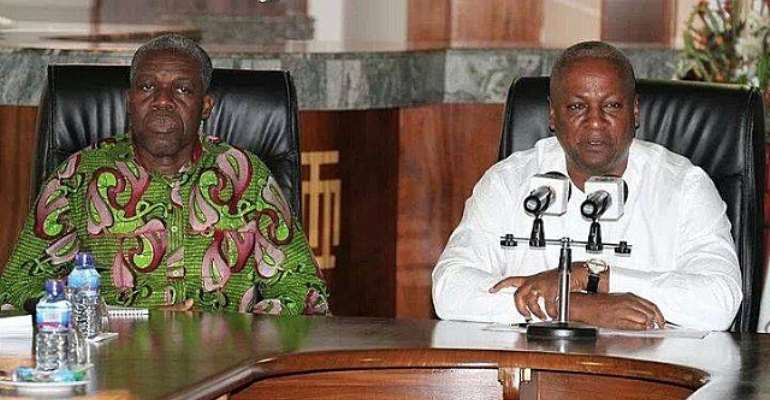 In practice, a political party is a conflation of diverse group of people who share same ideology, with a consensus to work in valence towards election with a view to forming a government and implementing their manifesto promises to impact on the lives of the masses.

It is worthy to note that the widely recognised and dominant political traditions in Ghana have been the ‘Nkrumaists’ and the Danquah-Dombo-Busia.

In a historical perspective, the story was told, that the first political party formed in Ghana on 4th August 1947 was the United Gold Coast Convention (UGCC).

It has been well-documented that the organisers of the UGCC generously extended an invitation to the equally intrepid and patriotic Dr Nkrumah in London to take an important position as the secretary of the organisation.

To his credit, and as expected of a true patriot, Dr Nkrumah graciously obliged and took the position. But as it is with any other working team, unexpected dissonance ensued and the members unfortunately parted ways thereafter.

Subsequently, Dr Nkrumah, together with a few unhappy UGCC apologists broke away and formed the Convention Peoples Party (CPP) on 12th June 1949.

The other remaining members of the defunct UGCC then decided to form a new party which was called the United Party (UP).

Based on the obvious rich history of the Nkrumaists and the Danquah-Dombo-Busia traditions, the party faithful have the bragging rights about the authenticity of their respective ideologies.

Bizarrely, however, the supporters of the New Democratic Congress (NDC), a party that sprung out of a series of truculent coup d’états, have been parasitically holding on to the Nkrumaists tradition.

Take my word, dearest reader, that could never be right, because as far as Ghanaians are concerned, the NDC Party was founded on the ideals of coup makers, who had no spelled out ideology back then.

Perhaps, the brassbound NDC Party supporters are not content with their weird tradition, and hence seeking refuge in the Nkrumaists tradition.

The NDC Party apparatchiks, so to speak, have over the years been hoodwinking and proselytising unsuspecting Ghanaians to believing that the NDC Party is a subsidiary of the Nkrumaists tradition. How possible?

The fact however is, the NDC Party was founded on the ideals of coup making enthusiasts, who without doubt were novices in the political terrain.

Given the bizarre circumstances in which the NDC Party was formed, one would have expected a true probity, transparency and accountability within the elected NDC government, but that has never been the case.

Their bizarre posturing thus raises the crucial question as to how and why individuals go into politics.

Obviously, the reasons that inform individuals decision to enter into politics are multifaceted. First and foremost, some people claim they go into politics for the love of their nation and others just see power as an opportunity to amass wealth.

It is also believed that other people go into politics with a view to enjoying the power and satisfying their egos. And other politicians are empowered by the convictions of political ideologies.

Well, whatever their reasons for entering into politics, they, the politicians, especially, the NDC apparatchiks, have lost our respect, and, discerning citizens don’t trust them anymore.

Once upon a time, so to speak, anyone elected as president, or gained a seat in parliament was looked up to and respected by all. But alas, this is not the case anymore.

How can some of us show deference to incompetent and corrupt politicians like those in the NDC Party?

It would appear that they do not care for the masses; they only scramble for power in order to pursue their vested interests.

There is no denying or hiding the fact that governance is a serious business and as such it requires forward thinking, serious and committed group of people to bring about the needed advancement.

Nevertheless, it has not been always the case in Ghana’s democratic dispensation. The emergence of multi-party democracy has given birth to purposeful and maladaptive political parties.

Since the attainment of the independence from the British in 1957, the NDC tradition (PNDC and NDC) had governed the country more than any other government I can think of. In fact, that tradition had governed Ghana for approximately 27 years out of Ghana’s 60 years.

It is for this reason that some of us cannot get our head around how and why some people would choose to bypass the worst culprit, the NDC Party for Ghana’s poor macroeconomic indicators, and, would gleefully upbraid the likes of CPP, PNP, NLC, SMC, and NPP.

If we stroll down memory lane, the CPP tradition (CPP and PNP) governed the country for approximately 12 years.

Disappointingly, though, the last ‘Nkrumaists’ government formed by the PNP, and led by Dr Hilla Limann, was deposed by the founders of the NDC Party which was spearheaded by Ex-President J. J. Rawlings on 31st December 1981.

The military regimes of the NLC, SMC 1 and 2 ruled Ghana for approximately 10 years before the founders of the NDC revoltingly usurped power on 4th June 1979.

The UP tradition (PP and NPP) total share of the day-to-day management of the country is about 11 years to date.

In my humble opinion, in terms of useful infrastructural projects which put the country at a substantial and auspicious position, Dr Nkrumah’s CPP government did exceedingly better than any of the administrations that followed.

Then also, even though Prime Minister Kofi Abrefa Busia’s government lasted for less than three years, he did his utmost best in terms of meaningful development.

The achievements of Busia's government include inter alia, the building of roads, housing, provision of healthcare facilities and water.

Besides, Dr Busia was the first Ghanaian leader to create a ministry responsible for rural development, a decision which was in consonance with his consuming desire to improving the socio-economic living standards of the rural dwellers (Daily Guide, 11/07/2013).

Embarrasing Bossman Doesn't Fit To Be At The EC - Ahafo Com...
9 minutes ago

Alliance For Science Ghana Takes On Agric Minister Over GMO ...
1 hour ago