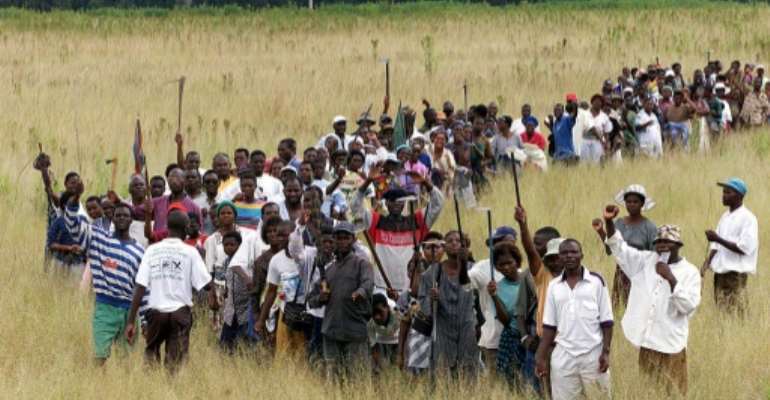 Zimbabwe's land disputes have remained a thorn in the side of the southern African country after Mugabe spearheaded the sometimes violent removal of thousands of white farmers in 2000. By Alexander JOE (AFP/File)

"All those who were illegally settled or who just settled themselves on resettlement land should vacate immediately," The Herald quoted Perrance Shiri, Zimbabwe's new lands and agriculture minister, as saying.

"Only those people with documentation of land occupancy and or those who were allocated land legitimately should remain on the farms and concentrate on production unhindered."

Shiri, a retired air force marshal who served in the military when the army took over government last month resulting in the ouster of Mugabe, said "sanity" had to prevail for Zimbabwe to revive its agriculture.

"If we are to meet the goals set out by government to use agriculture as the mainstay of the economy, we need to ensure unquestionable sanity on the farms," he said.

"Constitutionalism should be the guiding principle and as such behaviour and actions not conforming to this are not permissible under whatever circumstances."

Zimbabwe's land disputes have remained a thorn in the side of the southern African country after Mugabe spearheaded the sometimes violent removal of thousands of white farmers in 2000 to resettle landless blacks.

Mugabe declared he was correcting colonial-era injustices. But the ouster of experienced farmers had disastrous effects. A country that used to be a breadbasket failed to produce even enough food to feed itself.

Dozens of white farmers are legally contesting their forced removal from their farms, while a handful are still farming without hindrance.