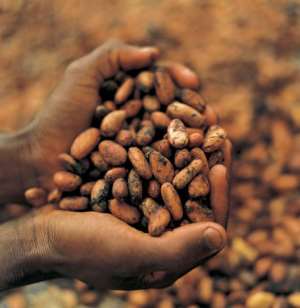 Cocoa farmers of the Anakum District in the Asankrangwa Area of The Church of Pentecost paid their tithes for the month of October with cocoa beans.

The initiative, which is the brainchild of the District Minister, Overseer Isaac Donkoh, was instituted to provide a convenient means for cocoa farmers to pay their tithes faithfully.

The novelty, according to him, also served as an opportunity for the Asankragwa Area Head, Apostle Robert Christian Arkoh, to pray over the farm produce and for the Lord to heal their lands due to a decline in harvest.

The cocoa beans were brought to the Anakum Central church on November 10, 2017, to mark the opening of a new stock for the cocoa season and to dedicate the farm produce to the Lord.

Speaking on the topic “I Am An Example Of Christ In Wealth Creation”, Apostle Ackon said that Abraham became very rich because he revered God and was faithful to Him by giving God a tenth of his earnings to Melchizedek the High Priest. (Genesis 13:2)

He also said that Job had a glorious end because he maintained his integrity even when his wife urged him to give up.

“The God who never sleeps nor slumber, the all-knowing One, is watching our actions of unfaithfulness. We must therefore repent and turn to the One who is able to bless those who remain faithful to Him,” Apostle Ackon stated.

After the sermon, the Area Head led members to pray for repentance and to rededicate their lives to the Lord.

To climax the service, Apostle Ackon, Overseer Isaac Donkoh and the Elders prayed over the cocoa beans for a bounty harvest in the coming year.

The District Minister, Overseer Isaac Donkoh disclosed that, in all, 36 bags of cocoa beans at a total cost of GH₵ 17,100.00, together with a cash amount of GH₵1,200.00 was realized as the gross tithe of the Anakum District for the month of October.

I don't recall we ever changing a leader in the middle of a ...
24 minutes ago