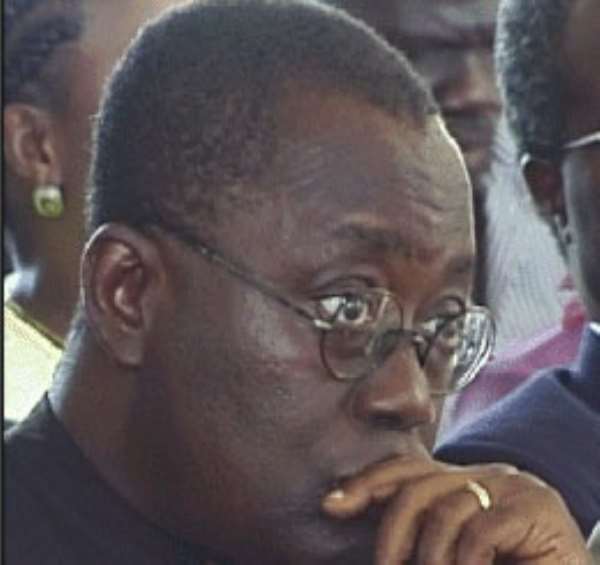 ... Plays the let-all-wait game Accra, May 31, (Chronicle) -- In a classic political game of one-upmanship, the most obvious contender for the 2008 New Patriotic Party presidential ticket yesterday reacted to calls by his own Sanhedrin to begin his push for the position.

Messrs. Victor O. Newman and Gabby Otchere-Darko, political ally and nephew respectively, of Nana Akufo-Addo, Member of Parliament for Abuakwa South and Minister for Foreign Affairs, over the week called on him to begin to come down and make his move.

Otchere-Darko is the Editor-In-Chief of the 'Statesman,' owned by Nana Akufo-Addo and recently “sold” to his cousin, Mr. Ken Ofori-Atta/Databank.

Nana Addo's reaction came in the form of an open letter to Victor Newman, which sounded like a statesmanlike call on the dozens or so contenders, who appear to have already stolen a start on him, while he remained suspended in the air.

Lately, Chronicle Intelligence has spotted unusual activities of some of the aspirants on the campaign trail.

In the letter itself, the astute politician pointed out the political trials the party and, for that matter, the government, was undergoing at the moment, but argues that, “The most effective foundation for a successful tilt at the presidency by an NPP candidate in 2008 will be the good performance of the Kufuor government between now and then,” adding that, “lf the government delivers on its promise of improving the social and economic conditions of the mass of our people, which it can, the work of the candidate would be considerably lightened.”

Nana Addo called for “unity, discipline, and loyalty,” to be the watchword of members, as the party's “difficulties have been extended by the campaign of baseless allegations levelled against the integrity of the President, over the hotel purchase by his son, which is part of the clearly orchestrated chorus of corruption that the opposition is using as its main tool to undermine the government.”

He therefore stressed on the need for all party members, to put their hands on deck, to ensure President Kufuor left a positive legacy, which would guarantee a member of the party succeeding him.

Nana Addo contended that the NDC is not attractive to the broad masses of Ghanaians, and also that it was because Jerry Rawlings did not leave a positive legacy that Prof.

John Mills failed to succeed him.

Here we go with the full text of the open letter: “I was not at home when my old newspaper, our beloved “Statesman,” carried an article by you urging me to make my voice heard on the issue of the next presidential candidate of our great party, the New Patriotic Party. Much of it hinged on the need to boost the morale of our supporters at a difficult moment for the party and its government. It was a very public call - hence the response of this open letter.

It is common ground that our government is experiencing its first serious political squall since we won the historic elections of 2000, some five years ago. It began, early in the second term, with the decision of the President, with the full support of his entire Cabinet, to order a fifty percent increase in the price of petroleum products.

None of us were under any illusions about the difficulties this decision would entail for the lives of ordinary people and also for our own political fortunes. We felt then, and still feel that the decision was necessary in the national interest, even if painful. We would abdicate the responsibility of government if the only aim of our policy was constant popularity. The most important test of popularity takes place in December 2008, three and a half years away, when the Ghanaian people give their verdict on the whole of the record of our second term, not on a particular item or phase of it. Our difficulties have been extended by the campaign of baseless allegations levelled against the integrity of the President over the hotel purchase by his son, which is part of the clearly orchestrated chorus of corruption that the opposition is using as its main tool to undermine the government. Our ship appears to be passing through stormy waters.

The duty of those of us on board in these circumstances is clear- we all have to rally around the captain and assist him to steer the ship to shore. Unity, discipline and loyalty have to be our watchwords if we are not all to go down with the ship. It is time for all hands on deck so that we can steady the ship and bring it home safely to port.

I have not changed the view that I expressed at my vetting early this year. The most effective foundation for a successful tilt at the presidency by an NPP candidate in 2008 will be the good performance of the Kufuor government between now and then, lf the government delivers on its promise of improving the social and economic conditions of the mass of our people, which it can, the work of the candidate would be considerably lightened. I daresay that if Jerry Rawlings had left a positive legacy to defend Fiifi Mills, a contemporary from Legon Hall, would probably be President of the Republic today. That then, is where I want to put my energies for now - helping build a Kufuor legacy for 2008. It should be the aim of all of us.

I am aware of, and share the anxiety of many in the party about the succession issue in 2008. Indeed, I know that, in certain party circles, it has become an obsession, one which, it is now clear; the party needs to manage if it is not to undermine the cohesion of our effort at our main task —ensuring the success of the government under the leadership of the President.

I am sure that very soon the party will define the guidelines of the competition for future leadership and I will act within them, as I trust others also will. This is the first time in the history of our noble tradition that we are confronted with the problem of organising in power an orderly succession to our leadership, and thus to the leadership of the nation, and we need to get it right I am fortified by three things.

Firstly, it has become obvious that the NPP project — the development of our society in freedom is the only project in town. There is no credible alternative. The prospect of a return of a Rawlings - controlled NDC to power does not appeal to the broad masses of our people, and, God willing, will not happen.

Secondly, the President and his government continue to be fully focused on the goal of national transformation which we promised the Ghanaian people we would achieve. Self-serving attacks from political quarters that have lost all credibility will not divert us.

Thirdly, the NPP spirit is very much abroad and alive. Despite the disappointments that several faithful, hardworking party activists, like you, have suffered since we came to power, the concern across the length and breadth of the party for the health of the NPP project remains very deep.

This is a source of great strength for our movement.

We need to harness the commitment, dedication and energy of scores and hundreds and thousands of genuine party workers so that, with hard work and the strong showing of the Kufuor government, we shall score, God willing, a hat-trick of victories in December 2008 to allow us the opportunity to continue with the building of our project in order to bring prosperity, freedom and dignity to the lives of our people.”