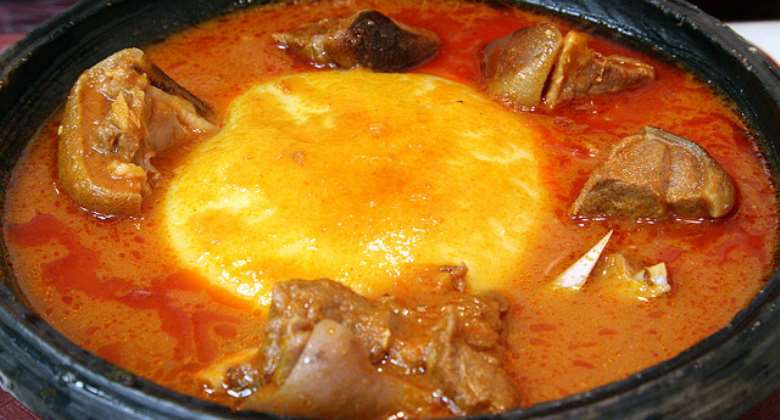 Akans in Ghana love their fufu which is now eaten in many parts of Ghana because of inter-mingling through marriages, educational opportunities in boarding institutions, and cultural diffusion. Fufu eating is therefore endemic and ubiquitous throughout Ghana.

Fufu in Ghana is a mixture of cooked and pounded plantain and cassava to form a jelly-like paste which is eaten with a variety of soups prepared with many condiments, vegetables, hot spices and meat or fish.

Bentua is the Akan name for syringe or the tube for administering rectal enema which is usually made from a dried bent gourd of the Cucurbitaceae species. It is said that ancient Egyptians administered enemas once a month to clean their systems (collectmedicalantiques.com)

Akans claim ancestry and descent from the ancient Egyptians as evidenced by many similarities of their cultural systems such as their nativity names, burial rituals, chieftaincy regalia of the stool (Asesegua) (Nana Banche Darkwa, 2014)

Herodotus, the Greek historian wrote about the ancient Egyptians thus:

“They purge themselves every month, three days in succession seeking to preserve health by emetics and clysters; for they suppose that all diseases to which men are subject proceed from the food they use.”

Akans also love their syringe or bentua for administering enema. They believe that after orally delighting themselves with their delectable and inimitable delicatessens such as the fufu and soups, they should administer enema through the anus to evacuate their congested alimentary canal.

It is believed that many diseases have their origins from blockages in the alimentary canal. Thus constipation, thought to be the cause of headaches and leading to colon cancer, has to be dealt with. Even some men believe impotence to be caused by a congested system.

Our diet should have enough roughage from fibre foods such as whole wheat bran, okra, unpolished maize, orange fibre, sweet potato fibre, among others. In this day and age of eating out from restaurants and hotels, the incidence of constipation could be higher.

Many Akans believe that enema can cure many diseases such as infertility, impotence, menstrual pains, and waist pains, among many others.

Abel & Busia (2005) write that Akans view illness as disequilibrium between the physical and spiritual worlds of the sick person because Akans view health as holistic. Alternate medicine is therefore practised a lot in Ghana where about 70% depend on traditional medicine because of the belief that disease has spiritual as well as physical causes.

Even when people are not ill, as a precautionary or preventive measure, they will drink some tree bark decoctions and boiled leaves decoctions. Others will take de-wormers, purgatives, and also resort to enema (Falconer et al. 1992; Abbiw, 1990; Ayensu, 1978) The public health delivery system is expensive and besides, many do not have access to them.

Under the First Republic of Nkrumah, Ghana had an excellent health delivery system. The doctor-to-population ratio has been diluted by the exodus of doctors, nurses and paramedics into the Diaspora, hence alternate herbal medicine became the alternative solution.

This writer remembers clearly in the 50s and early 60s how his parents administered to his siblings and himself several sessions of the enema plus oral administration of several laxatives such as Castor Oil, Mist Alba, Brooklax, Herb Tea, Epsom Salt, and Cascara, among other laxatives, purgatives, and emetics.

When you had headache or fever, it was Phensic, APC, Aspro, Aspirin, and the first line anti-biotic was M&B (May and Baker), known to many people as Awe-Awe (meaning, Chew-Chew) and many medicines from Bayer from then West Germany, ICI (Imperial Chemical Industries-England), and Hoechst (West Germany).

Such medicines included malaria treatment medicines such as Chloroquin, Mepacrine, Paludrine, Nivaquine, Camoquine, Diaprim, Resochin, Avlochlor, and Quinine. Some of the malaria tablets were sold cheaply from the Post Offices throughout Ghana.

Malaria aside, the major medical problem assailing most people in Ghana medically is constipation. To evacuate the bowels, a cocktail of herbs, spices and other preparations are used.

To administer enema, the person administering it should do it early in the morning without a meal before that. The medicine is mixed, sieved with a sieve or any piece of cloth which is neat, and the medicine is poured into the bent gourd which has a long tube end and a bulbous end also with a hole. The enemee puts a bit of Vaseline or oil at the tube end to ease its passage. With one hand on the floor and the other hand holding the bulbous end of the gourd, he taps the decoction and it flows inside him.

This exercise can be done by mothers for young ones. There is a plastic syringe which is used to suck the pastry mixture for administration through the rectal canal. This plastic version is not preferred by many because it pumps air inside the body. Some herbs can be toxic and some people feel dizzy after administering the decoctions of herbs, barks, roots and spices which are ground into paste and mixed in water.

Enema is believed to be a good colon cleanser but it may not penetrate far. Patients suffering from piles, abdominal pains, and haemorrhage, among others have found relief taking this route of enema. Even women expecting are given mild prescriptions of enema using herbal soaps and tepid water.

Ghanaians have used enema from time immemorial and will continue resorting to traditional medicine because of poverty, its efficacy, and its spiritual connotations. Traditional medicine is now big business in Ghana with a degree being offered in it at The Kwame Nkrumah University of Science and Technology (KNUST). It behoves us all as Ghanaians to preserve the names of our traditional herbs and plants and to pass on the knowledge to our offspring. However, we should be wary of charlatans and quack practitioners some of whom peddle harmful placebos.

The medicine from behind: The frequent use of enemas in western African traditional medicine

of medicinal plants used against non-communicable diseases in Rodrigues Island,

Abel, Caroline & Busia, Kofi (2005) An Exploratory Ethno-botanical Study of the Practice of Herbal Medicine by the Akan people of Ghana [Online] Alternative Medicine