Death toll in illegal mine clash increase to 13- Residents claim 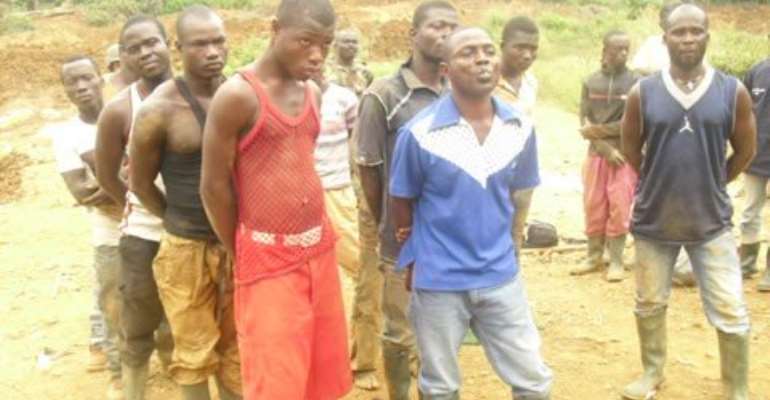 Residents of Asamama in the Atiwa District of the Eastern Region are claiming to have retrieved eleven more bodies following a gun battle between anti-galamsey security taskforce and illegal miners, Thursday afternoon.

The residents told Joy News' Kofi Siaw, two of the bodies were retrieved from a class room where the illegal miners were believed to have sought refuge after sustaining the gunshot wounds.

The Eastern Region police said a total of 22 people have been arrested after the incident yesterday.

Background
An attempt to swoop in on illegal miners yesterday turned bloody as gun shots were fired by the task force and the illegal miners.

Joy News' Latif Iddrisu who was present in the heat of the battle reported two were killed after the exchanges which lasted for several minutes.

As he spoke to some of the miners who were panting and expressing their displeasure over the police invasion, reports of gun shots were heard blaring at the background.

In the end, the miners were dispersed but not without casualties. The illegal miners have sworn to attack some of the residents who they alleged gave information to the police about their activities.

On Friday Yao Graham of the Third World Network, a civil society group told Joy News the policing response may not be the only solution to solving the galamsey problem.

He said the galamsey problem has become widespread because the root of the problem is one of socio-economic dynamics.

Graham noted the crisis in the employment situation in the country has also forced a number of the country's youth to venture into galamsey.

He said an economy that concentrates only on inflation targeting at the expense of other important sectors creates undesirable consequences which should be looked at.

He called for a more sophisticated solution to fighting the galamsey canker, stating the policing response may not solve the problem entirely.