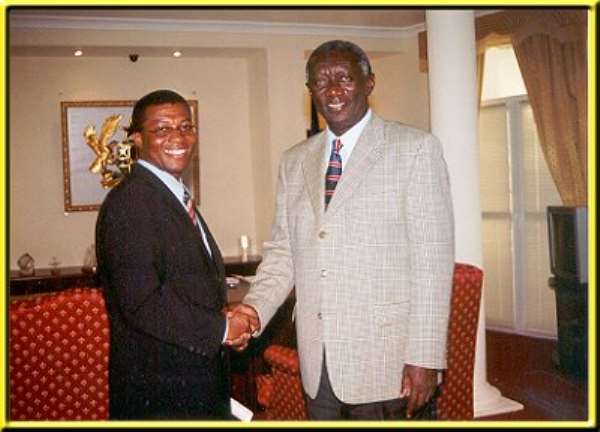 Let me begin by saying that when criticisms are aired publicly against another person intending to bring disrepute, the writer must identify who he or she is and what, if any, are the relationship to the person being criticized. The 10,000 strong Ghanaian community in Australia would know that there is probably no one by the name of “Kotua Selira” and that this piece of writing was done purely with a malicious intent to cause harm among the community and to tarnish the good reputation of Hon Kofi Osei-Ameyaw. Let me highlight some of the good work done by Mr Osei-Ameyeaw that was not mentioned and must be told to the rest of the Ghanaian community. Firstly, Mr Osei-Ameyaw was already a wealthy professional living a comfortable life in Australia before deciding to serve his people by taking on the job as Ghana's Consul-General. Hon Kofi Osei-Ameyaw, an Ewe, was the only one who was able to unite the whole Ghanaian ethnic community in Australia that would have otherwise allowed the ugly head of communal racism to arise. For the past 6 years or so I was at every Christmas day party organized by Mr Osei-Ameyaw. It was always a free event (with food and drinks) open to all Ghanaians. The same gratitude was also extended for the Ghana Independace Day celebrations. Mr & Mrs Osei-Ameyaw's generosity was sadly missed when he was not in town to hold his Christmas party last year, where no one else was able to fill his shoes to organize a free party for the community. The Consul-General's position is an honorary one. He does not receive any salary from the Ghana Government. Mr Osei-Ameyaw using his own funds pays for all the running of the office of Consulate-General, the 2 staff members who work there, the office equipment and the rent. Can anyone remember that a few years ago the Consul-General for Ghana was Hon Neveille Wran, former Premier of New South Wales. He was operating from Sydney with jurisdiction throughout Queensland, Victoria, South Australia and Tasmania. Mr Rod Marstson was the Honorary Consul in Perth with jurisdiction throughout Western Australia and Northern Territory. Due to the high cost of operating the Consulate Hon Neveille Wran resigned and the office was closed for many years until Hon Kofi Osei-Ameyaw was appointed and the consulate was reopened. The amount the Consulate in Sydney is charging for issuing visas and the procedure used are exactly the same that has been applied all these years. This was never criticized or complained about in the past. On what basis is this criticism now valid? Has the writer compared the rates charged by all the other Consulates run by other countries in Australia? Or is the writer trying to insinuate some hidden meaning to the costs by breaking it down? The writer stated in the article that Mr Osei-Ameyew did not inform the community when he was going back to Ghana? My question to the writer is, is there any protocol, which states that the Consul-General should inform the community whenever he intends to travel outside Australia? What the author wanted was probably a free farewell party from Mr Osei-Ameyaw? He did not vacate his post in secrecy? Maybe some people in the community did not know the exact date he left Sydney, but it was no secret. Also Mr Osei-Ameyaw did not transfer the honorary position of Consul-General to “his friend”. Mr Osei-Ameyaw has no power to do so. What he was able to do was to delegate the duties and responsibilities bestowed upon him, to another responsible person to carry on. Would the writer feel better if the Consulate was closed down? At some point on his return, Mr Osei-Ameyaw would hand in his formal resignation from this position, which will then get filled officially. I will ask the writer to check with the Ghana Embassy in Japan (who are responsible for the affairs of Australia) to verify the details before attempting to tarnish the good name of Hon Kofi Osei-Ameyaw. What I can ascertain from the writing of the author is the typical Ghanaian mentality of attempting to ridicule and PHD “pull- him -down” the good work done by someone in their own community. I spoke to number of people in Sydney who has read the article and found it to be a disgusting piece of writing from someone who doesn't know the real facts but only want to throw mud. I am sure it will not stick on the good name of the Hon Kofi Osei-Ameyaw, but only on the reputation of the writer. Steve Garbrah [email protected] [email protected] Phone: 61-418100127