Access To And Understanding Of The Law Essential To Crime Prevention 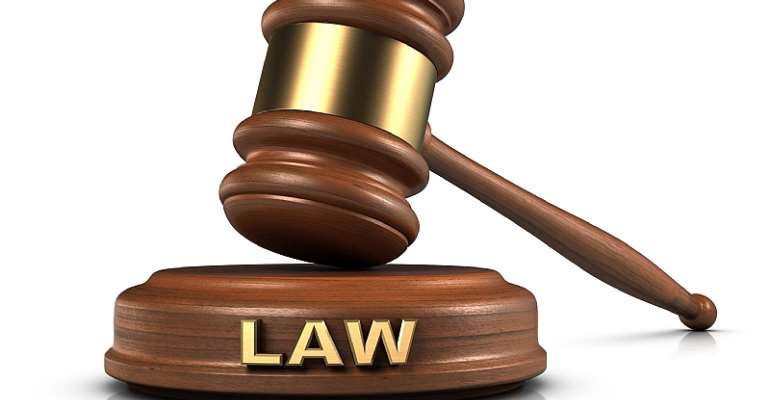 For some years now the world, Ghana inclusive, has been making a lot of noise about access to information. That is good, but of what use is information to one who has access to it but does not understand the information in his/her possession? It's of no use and serves no purpose. This has been the case of the Ghanaian populace in relation to the laws of the nation.

Reading the book, "CRIMINAL LAW SERIES, THE GENERAL PART OF CRIMINAL LAW - A GHANAIAN CASE BOOK VOLUME 1" by HENRIETTA J.A.N. MENSA-BONSU, I got the impression that the Laws of our country were made more to prevent crime [proactive], than to deal with crime after it has been committed [reactive].

I got this impression from the author's statement that "without the individual's fear of criminal sanctions, criminal laws will not be adhered to" [paraphrased]. In other words, with the individual's fear of punishment, he/she will refrain from doing what is prohibited. After all, as children, we refrained from doing what we knew would bring the rod down hard on our backs. But looking around, listening to news reports and reading the newspapers, it is quite clear that this has not been the case over the years.

This makes me ask: how come? To answer this I look at three issues the author sets out in defining "crime". She says for an act to be considered a crime, it must first be prohibited, secondly the prohibition must be by a statute in force, and thirdly the breach of the said statute must carry penal consequences, i.e. some form of punishment.

Acticle 19(11) of the 1992 Constitution which reads, "No person shall be convicted of a criminal offence unless the offence is defined and the penalty for it is prescribed in a written law", and which gives constitutional backing to the second issue raised by the author, is in my opinion incomplete if any statute prohibiting any act is to be proactive.

The laws of any country are binding on all in the country. Having an offence and it's penalty prescribed in a written law doesn't necessarily make it known to all on whom that law is binding, [where "knowing" here means access to, and understanding of the said law].

To make it complete, and proactive, something about a person "knowing" about the written law in advance should have been added. The author of the aforementioned book lays out this opinion more clearly in her book saying: "imposing punishment on someone is considered so important that a person must not be made to suffer for the doing or not doing of anything, unless the prohition was known in advance, i.e. the citizen must be on notice that engaging in conduct of a certain kind will incur the State's displeasure and evoke sanctions imposed by the State" [paraphrased]. If this advance knowledge bit had been added to Acticle 19(11) of the '92 Constitution, the situation would have been quite different.

I say this because the Ghanaian populace is divided into two distinct groups: the "State", and the "citizens, population at large and rest of society" as is used in the aforementioned book. Though the later of the two groups makes up the majority of the nation's population, access to, and understanding of the written laws that are supposed to control our actions and/or inactions rests in the bossom of the few individuals who constitute the State, i.e. the minority.

As it stands now, to have access to the laws of our country, that is,for the "citizens, population at large and the rest of society"[the majority], one must buy the specific documents that contains the rules and regulations that are to determine what we do and/or do not do, like the '92 Constitution, the Criminal Code(1960), Laws Of Ghana Volumes 1-7(2004), etc. With most of this group of people having little or no formal education, even with access to the written laws of our country, I dare say understanding them will be very difficult, if not impossible.

No hair dresser, seamstresses/tailor, farmer, fishmonger, fisherman, carpenter, mason, by-day labourer, vegetables seller, food vendor, apprentice, and the likes will spend any of the less-than-enough money they make on something they neither can read nor understand.

Certain learned individuals have taken it upon themselves to write on specific areas of the law that deals with the everyday life, with the aim of making it easier to understand, e.g. GHANA LAW OF LANDLORD AND TENANT by A.K.P. KLUDZE, LAW OF WILLS IN GHANA by SAMUEL AZU CRABBE, FAMILY LAW IN GHANA by WILLIAM E. OFFEI, CRIMINAL LAW SERIES by HENRIETTA J.A.N. MENSA-BONSU, and many more. But, even these will not be easily readable to the kind of people who make up the lager percentage of the "citizens, population at large and rest of society", not to mention the understanding bit. And lest I forget, these books come at no small cost.

The state-owned media houses, National Commission on Civic Education [NCCA], Municipal and District Assemblies, etc. should design programmes in the widely spoken local languages, have these programmes desseminated using Public Announcement Vans, community based drama, to explain what is practically meant when the law says ABC is prohibited, in order to bring the laws to the doorsteps of the "common folks" who are the majority of the Ghanaian populace in an attempt to make the laws more proactive.