How Climate Change Is A “Creeping Disaster” In Ghana! 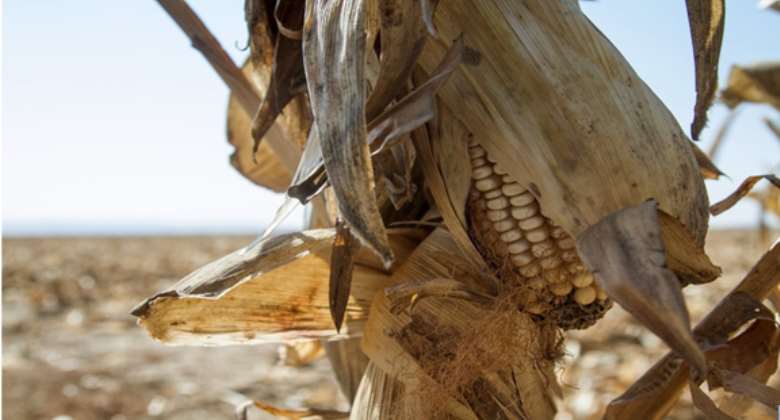 “I am confused and don’t think my child can continue her education to the university. I will not plant next year as I am struggling to keep a goat alive and all my crops are flooded. I have lost everything that I can boast off”.

Those were the words of Veronica, a 35 year old widow farmer who lives with her eight children from Savelugu in the northern region of Ghana. She belongs to a family where farming had been followed by many of their ancestors and depends on it for their livelihood.

Every farming season, Veronica goes to their village to cultivate and harvest maize, millet and sorghum which are the commonest staple food crops grown by people in the northern part of the country. Besides these food crops, the family is famous for livestock rearing such as cattle, sheep, goat and guinea fowl production. Veronica on the other hand has twenty goats; most of which have been sick for the past two months because of lack of water. She rushes and sold those she cannot feed which affected her income.

“I can’t buy enough food to eat and feed my children; I have to cut from three meals a day to one. We have to consume millet flour which is not a nutritious diet”. Veronica added.

The family was not an exception to last year’s flood which led to the displacement of their homes, chicken, goats-everything got smashed. Veronica woke up and heard her neighbors shouting. When she got off the bed and swung her legs off the bed, she became confused to step into water. To their utter dismay, the water level was just around their ankles and the whole of their cultivated farm of 10 acres of maize, millet and sorghum was flooded. They moaned bitterly and said “for what crime have we committed to be paid with such an unforgettable punishment”.

A retired teacher who was in their mist climbed up a tree to save himself and a snake followed him also seeking refuge up the same tree. He managed to discourage the snake from coming to his direction. As soon as the teacher felt comfortable and settled on a strong branch, above him was another snake that was looking down at him. He shouted “help, help” but was finally bitten by the snake which eventually led to his death.

The family used to be the richest in the community with many cattle, goats, sheep and guinea fowls and have enough food to eat and surplus for sale. Now things aren’t that easy as it were for the family as some of the children are beggars in the street as a result of these climate change impacts.

The yearly drought in this region makes it difficult for farmers to provide sufficient food and water to their animals as it always withered up their crops, dried up streams, scorched the earth and left many trees naked. Watching the crop tendrils withering and young roots rotting is always a sorrowful moment to these farmers. Because of water scarcity in this region, men go off with livestock to find water by travelling hundreds of miles for months at a time or they drop out of pastoral life and flow into towns to look for odd jobs by leaving their wives and children behind whiles women treks a long distance in search of it and ends up as rape victims.

Water shortages and flood is severe especially in the three northern regions of Ghana. These regions, which have extensive agricultural lands could have played a key role in the food security of millions of people but rising temperatures have caused severe drought, decreased livestock, fish population, crop declines, food shortages which has led to increased in the number of malnourished people, influx of pest and diseases such as cerebro-spinal meningitis, malaria, cholera, cardiovascular diseases taking away human life in recent years.

The severe drought and flood in these regions has also led to migration of young energetic men and women to the major cities in search of greener pastures engaging in various dehumanizing ventures such as forced labor and domestic servitude. There is no year that passes by without thousands of women fleeing from the northern part of the country to the southern part due to these climate change impacts where they are forced to carry heavy luggage’s which is more than their strength and injurious to their health and at the end; they earn less than $1.25 a day. These women migrants in Ghana are referred to as “kayayei” which means head porters but I always refer them as “internal climate refugees”.

Climate change is indeed a creeping disaster in my beloved country, Ghana, as recorded in the 2007 flood that destroyed the lives of human and animals, arable land, homes, schools, public buildings and markets. About half a million people were displaced, over 30,000 houses collapsed and nearly 200,000 metric tones of food crops were destroyed in the northern part of the country. It required more than $25 million for emergency response and caused more than $130 million worth of direct damage. In 2010, an estimated 378, 000 people were displaced. In 2015, flood results from heavy continuous rainfall killed 25 people, with petrol explosion caused by the flooding killed 200 more people and this year is not an exception.

The excessive hot weather due to deficit of rainfall in the country is causing heat wave which is deadly particularly among the poor who may not have the luxury of retreating to air-conditioned rooms. The increase of heat in the country has led to an increase in fire risk which is expected to bring more wildfires which will lead to increased mortality and morbidity from its smoke. The harsh weather conditions such as drought, floods and heat waves tend to increase stress on all those who are already mentally ill in the country.

Electricity power for the country depends mainly from hydropower generated from a hydropower dam at Akosombo built in 1965. The entire economy of the country is currently suffering from low water level from the Akosombo dam caused by drought. This has affected all sectors of the economy including industry, mining and domestic. Manufacturers on the other hand are reducing output, shortening the workweek whiles other factories remain idle. Revenue to the state dwindled due to shortfalls in production by several million dollars in 2006 due to the severe drought. According to the climate change Vulnerability Index for 2015, seven of the ten countries most at risk from climate change are in Africa.

Climate change is one of the greatest threats and it is crucial for all countries to act now. We are at cross-roads and only a decisive and immediate action will make it possible to influence the future consequences of climate change. Developed countries must cut their emissions drastically as countries like Ghana have contributed the least to deserve this menace. I therefore call for 1.5 degrees as limiting warming below 2 degrees will yield a number of avoided impacts such as sea level rise <1m, flood, drought, to prevent severe, pervasive and potentially irreversible impacts while allowing our ecosystem to adapt naturally to ensure that food production is not threatened.