World Day To Combat Desertification And Its Significance 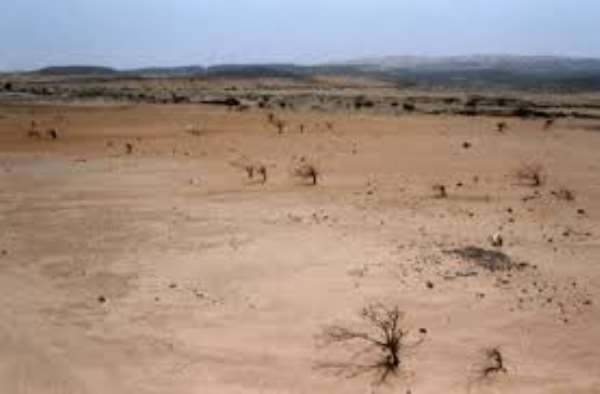 Ghana would on June 17, this year, join the global community to mark the World Day to Combat Desertification and Drought under the theme, “Inclusive Cooperation for Achieving Land Degradation Neutrality”. The Minister of Environment, Science, Technology and Innovation (MESTI), Mahama Ayariga, is expected to address the function to be held at Bongo District in the Upper East Region.

The day was set aside by the United Nations General Assembly in 1994 to mark this important global event in every calendar year that falls on June 17.

The United Nations Convention to Combat Desertification (UNCCD) , established by the United Nations General Assembly, is the sole legal binding international agreement linking environment and development to sustainable land management. Parties to the Convention which include African countries work together to maintain and restore land and soil productivity, and to mitigate the effects of drought in dry lands.

Ghana signed and ratified the United Nations Convention to Combat Desertification in 1996 to show commitment to combat desertification and mitigate the effects of drought. In Ghana the Ministry of Environment, Science, Technology and Innovation, in collaboration with the Environmental Protection Agency (EPA) is playing a leading role in this direction.

The question one may ask is that what is Desertification? Desertification is a phenomenon that ranks among the greatest environmental challenges of our time. Although desertification can include the encroachment of sand dunes on land, it does not refer solely to the advance of deserts. Rather, it is the persistent degradation of dry land ecosystems by human activities including unsustainable farming practices; Bush burning, indiscriminate felling of tree for charcoal burning, illegal chainsaw operators, mining, overgrazing and clear-cutting of land and by climate change.

As a result of land degradation and climate change, the severity and frequency of drought have been increasing along with floods and extreme temperatures. Research shows that this had led to more than 50 per cent of agriculture land becoming severely degraded , leading to the reduction of agricultural productivity as well as the decline in biodiversity. There is no doubt that the spate of the chronic malnourishment of children and pregnant women in the three Northern Regions could be attributed to the land degradation and desertification that often lead to the lower productivity of agriculture..

In other words, it is very pertinent to note that without long term solution, desertification and land degradation would affect food production as well as lead to increase migration and threaten the stability of many nations and regions. The livelihood and well-being of hundreds of millions of people would also be at stake. That is why the decision by World leaders to make land degradation neutrality as one of the targets of the Sustainable Development Goals is very welcoming. This implies rehabilitating at least twelve million hectares of degraded land globally in every year.

What is more worrisome is the recent upsurge of illegal chain operators in the three Northern Regions who cut down trees indiscriminately, particularly rosewoods for export to China , where it is in high demand and also the indiscriminate cutting down of economic trees such as the Shea tree for charcoal production. Nomadic activities of Fulani herds who enter the country with their cattle is another major cause of desertification as they often overgraze and step the land with their hooves

To help reverse the trend of desertification in the three regions, the Ministry of Environment, Science, Technology and Innovation through the Environmental Protection Agency is implementing the Ghana Environmental Management Project( GEMP ) and the Sustainable Land and Water Management Project( SLWMP) in the three Northern Regions with support from the Global Environment Facility and World Bank which has so far provided vegetation cover on some significant portion of degraded lands across the three Northern Regions.

Speaking to this Writer in Bolgatanga , the National Focal Person in Ghana for the United Nations Convention to Combat Desertification , who is also the Upper East Regional Director of the Environmental Protection Agency , Mr Asher Nkegbe, stated that through the Ghana Environmental Management Project and Sustainable Land and Water Management Project , his outfit had empowered many communities in the region to create buffer zone, zai farming, stone bonding , composing, Farmer Managed Natural Regeneration (FMNR), establishment of woodlots among others which are key to addressing the issue of land degradation and desertification as well as climate change.

Indiscriminate felling of trees for charcoal burning which is characterized by the Northern Regions which is major cause of desertification problem, the National Focal Person in Ghana for the United Nations Convention to Combat Desertification , noted, had also been reduced significantly as result of the formation of women groups into Village Saving Loan Association (VSLA) who used to engage in charcoal production activities

The implementation of the greening Ghana Project, an initiative introduced by the MESTI, aimed at increasing the vegetative cover and restoring degraded areas of the region as well as serve as Ghana’s contribution towards the reduction of global warming and climate change conditions is also making progress.

The projects in 2015, handed over 16,899 assorted tree seedlings to the Regional Directorate of Ghana Education Service for distribution to 166 selected schools in the Region. A visit to some of the project sites by this Writer, revealed that the tree seedlings which include grafted mangoes, moringa, mahogany, cashew, cassia, Albysia and teak have greater survival rate.

Mr Nkegbe, who disclosed that this year the Greening Ghana Project would be scaled up, said the project would complement the existing landscape approach adopted by the EPA under the GEMP and SLWM Project.

Mr Nkegbe noted that the effective practice of sustainable land and water management were strong tools for achieving some of the Sustainable Development Goals, particularly poverty eradication , food and water security, biodiversity protection and climate change mitigation and adaption.

Outlining some of the activities earmarked for the World Day to Combat Desertification and Drought, Mr Nkegbe , mentioned that about 20,000 people including the staff of the Regional Coordinating Council (RCC) , the District Assemblies, the Regional Environmental Management Committee, Traditional and Religious leaders, local NGO’s, opinion leaders and the media would be engaged to take actions to restore and rehabilitate degraded land with the ultimate aim of contributing towards achieving the overall goal of sustainable development.

He stated that the Environmental Protection Agency together with the Ministry of Food and Agricultural (MOFA) and other stakeholders would introduce various Sustainable Land and Water Management(SLWM) interventions in degraded communities in the region particularly Kunkua , a community within the catchment area of the Vea Irrigation Dam to restore 2000ha of degraded lands.

Communities, he noted, would also be empowered and encouraged to undertake enrichment planting of four thousand seedlings including vetiver grasses within the buffer zones of the Vea Irrigation Dam to restore the degraded areas within the riparian vegetation of the Vea Irrigation dam and conserve water in the Vea dam for domestic use in the Bolgatanga Municipality and Bongo District.

He added that the EPA would also sign up to the restoration of forty (40) ha degraded farm lands at Zabogu, Kuka-yakin and Kpalwega in the Bawku Municipality through sustainable land and water management techniques, organise activities including radio discussions on environment, quiz competition, sustainable land and water management practices such as: zai, reinforcement of contour bunds with stones and vetiver grass, composting, tree planting, and creation of protected areas. A durbar will also be organised to climax the Day’s celebration.”

It is also heart warning to note that Ghana has joined the global community to implement Land Degradation Neutrality and the Great Green War which are all aimed at halting land degradation desertification and Climate Change in the three regions .

Additionally , there is also the urgent need for the Ministry of Environment, Science, Technology and Innovation and the Environmental Protection Agency to speed up the process of the revising and formulating the National Action Plan (NAP) it is designing to align with the United Nations Convention to Combat Desertification 10-year strategic plan, to enable Ghana get more external support to combat desertification in the country.

As we mark this year’s World day to combat Desertification and Drought, let us be reminded that a “healthy and productive land is the key resource for all life on earth The Paramount Chief of the Bongo Traditional area in the Upper East Region, Naba Baba Salifu Aleemyaarum is already implementing the green Bongo initiative which is aimed at curbing land degradation and desertification in the area. This must be emulated by all traditional rulers.

"I want every Okada driver to be a billionaire" — ‘CODA Dri...
15 minutes ago