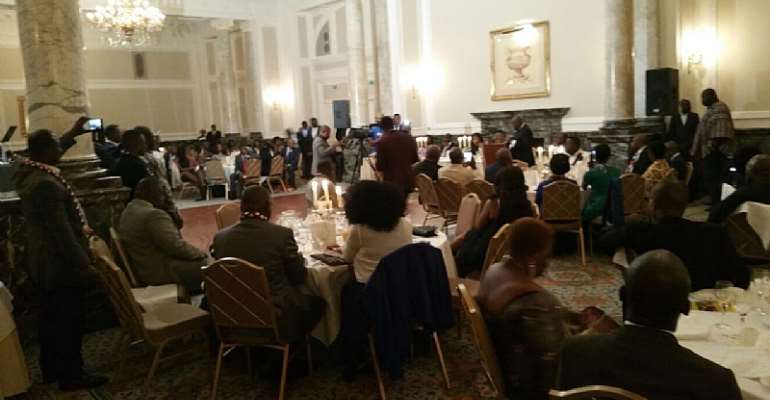 Nana Addo Dankwa Akufo-Addo, the 2016 presidential candidate of the New Patriotic Party, says the vision of his government, God-willing from 2017, will be to transform Ghana’s economy from an exporter of raw materials, and a retailer of cheap imported goods, to a modernised, industrialized one focused on value addition activities.

This industrilialization, he indicated, will go hand-in-hand with improving the productivity of agriculture, spurred on by the production and marketing of additional cash crops such as cotton, coffee, oil palm, cashew and maize, which will boost export earnings for the country.

“It is this twin-track of rapid industrial expansion and increase of agricultural productivity that will generate the hundreds of thousands of jobs that our young people need,” he added.

Nana Akufo-Addo made this known when he outlined a number policy measures to help realise this vision, at a fundraising dinner organized in London by the UK branch of the Young Executive Forum of the NPP on Friday, June 11, 2016.

Ghana’s new status as a producer and exporter of petroleum, he said, offers the perfect opportunity to create a petrochemical industry, including monetising the country’s gas to create a multibillion dollar gas feedstock industry.

“Our project is to make Ghana a regional production and manufacturing centre, by weaving together our numerous natural resources, such as our food produce, extensive cash crops, gold, bauxite, iron ore, oil and gas, with our talents and energy to turn our nation into an economic powerhouse in West Africa and beyond,” he added.

Policy Framework
Nana Akufo-Addo noted that his government will introduce policy measures which will stimulate production, expand the productive capacity of the economy, and create jobs.

Thus, “the tax, borrow and spend approach of the Mahama administration”, will be abandoned, in favour of policies geared towards the reducing the cost of doing business to help small scale enterprises grow, and to make the Ghanaian economy become globally competitive.

To this end, he assured businesses and their owners of a reduction in corporate tax rate, the abolishing of VAT on Financial Services, removal of duties on the importation of raw materials and manufacturing equipment, amongst other fiscal incentives, to stimulate growth of the private sector.

The NPP flagbearer also announced an “enhanced employment Tax Credit Scheme” to provide incentives for companies which employ fresh graduates, to help curb the rising levels of graduate unemployment in the country.

Additionally, Nana Akufo-Addo said his government will put in place an effective legal framework to anchor fiscal discipline, hinged on the passage and enforcement of a Fiscal Responsibility Act that has bite.

“It will require governments to declare and commit to a fiscal policy that can be met. It will include fiscal rules, including rules governing election year spending, provisions for transparency and sanctions, including sanctions on the Executive itself,” he said.

On the environment, an Akufo-Addo government, he said, will put in place a policy that will lead to the effective management of forest reserves, the recovery of millions of acres of land devastated by open-cast and alluvial mining, and the protection of our water bodies, stressing that “protecting our environment is a necessity, not an option.”

Referring to the NPP’s manifesto of 2012, which announced the introduction of apprenticeship and skills training programmes for the youth, including those failed by the education system, he reiterated his commitment towards the establishment of such a scheme, as this will give the youth the practical skills they need to get a job as well as to drive a new industrialised economy.

“In partnership with the private sector, we will facilitate and support rapid development of skills, including establishing apprenticeship training for graduates from vocational and technical schools,” he noted.

The NPP flagbearer also made a firm commitment to the election of District Chief Executives (DCEs) during his tenure of office, explaining that “the time has come to bring accountability to local government through competitive politics. The election of DCEs at the local level can no longer be delayed. This will bring a great boost to local initiative and local self-reliance.”

In tackling the rampant cases of corruption, which have become widespread under the Mahama government, he reiterated his commitment to appointing “an Independent Special Prosecutor with a legislative mandate to deal with corruption, who will be appointed and empowered to tackle corruption.”

The restoration of teacher and nursing training allowances, he said, is non-negotiable, and “in doing so, we are still committed to our program of free senior high school education for all students at that level.”

A concerted effort in deepening the process of women’s involvement in the country’s politics and economy, he assured, will be made, continuing “with the initiatives that led President Kufuor to establish the first Ministry of Women’s Affairs. Gender equity is a cardinal concern of our times.”

He continued, “we have committed ourselves to establish a Zongo Development Fund as part of a broader Inner City Development Strategy to support development activity in the Zongo and inner city communities, and it is a commitment we are going to keep.”

The creative arts and entertainment industry, he noted, will be benefit from a fund aimed at supporting the industry and to grow local talent and create jobs.

In concluding, he said “we are going to develop Ghana into an ICT hub in the region”, explaining that “these are the broad frameworks of what we are going to do if we win”.