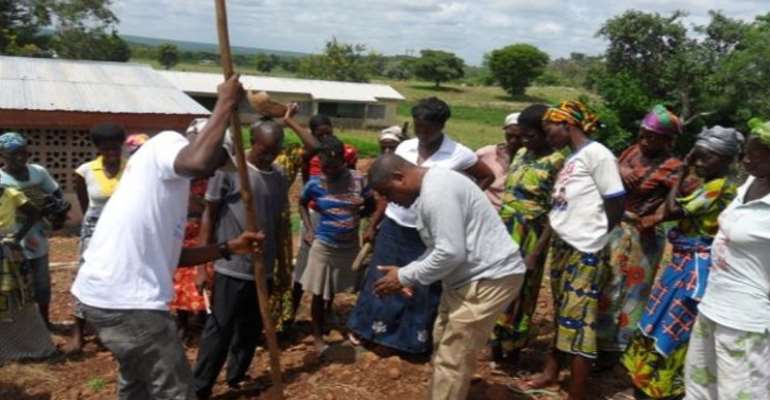 Land degradation is an increasing issue globally, exacerbated by climate change and affecting food security, threatening water resources and ultimately acting as a driver to migration.

All human life ultimately depends on land including the soil and water. From land, food is grown, on it protective shelters are raised, and through and across it, the fresh water we drink is purified and delivered. Land provides humans with the means to live and has been a provider of vital resources.

But at the start of the 21st century, our lands are no longer able to keep up with the pressures placed on its limited resources, increasing misuse and demands for it resulting in rapidly intensifying desertification and land degradation globally

Scientific research has proven that carbon emissions from the earth into the atmosphere does not only cause climate change globally , but also contributes significantly to land and environmental degradation and poor soil fertility which in turn leads to low agriculture productivity and household food insecurity.

Research has also shown that agriculture and land degradation are responsible for about 25 percent of carbon emissions globally.

However, the irony is that it has been scientifically proven that healthy soils can store large amount of carbon instead of allowing it into the atmosphere to affect the climate. In fact scientific research has shown that land is the largest carbon store on earth, after the oceans. Soils could take up much more carbon if managed sustainably.

Speaking to the Upper East Regional Director of the Environmental Protection Agency (EPA) , Mr Asher Nkegbe, who is also the United Nations Convention to Combat Desertification ( UNCCD) National Focal Point for Ghana, he stated that the sheer extent of dry lands in the country offers scale opportunities for carbon storage and improved adaptation for poor rural communities if prudently managed.

“Scientifically it is also proven that carbon storage in the soil could contribute to soil fertility thereby increasing food security. Experience shows that sustainably managing the land and rehabilitating it, where it has been degraded, provides valuable co-benefits in terms of food security and preserving biodiversity.” Mr. Nkegbe emphasized.

There is no doubt that, the poorest people with the fewest options are the hardest hit by the impact of climate change. Thus nearly eighty per cent of the poorest people in Ghana predominantly live on the land in rural areas. Their livelihoods mostly depend on small-scale rain-fed agriculture. Climate Change has led to less rainfall and more land degradation making the situation more terrifying.

Worldwide, in every year, up to twelve million hectares of productive land are lost globally due to land degradation and climate change. Gripped with this fear, the Intergovernmental Panel on Climate Change is warning us to expect a two percent drop in agriculture output per decade, as a result of climate change. The Intergovernmental panel on Climate Change also observed that if the current unsustainable farming practices continue, globally we would need an additional 4-6 million hectares a year for increased food production annually.

The Northern Ecological Zones of Ghana being the Northern, Upper East , Upper West Regions are the most affected when it comes to Climate Change and Food Security. The reason is simple. Induced human activities such as the continuous bush burning, unsustainable farming practices, indiscriminate felling of trees for charcoal production, farming close to river bodies, sand winning among others have led to land and environmental degradation.

“If we degrade the land, it leads to climate change because a degraded piece of land is unable to store carbon. It is a fact that human induced activities such as continuous bush burning, unsustainable farming practices, indiscriminate felling of trees for charcoal production, farming along river bodies and sand winning among others contribute to land degradation and climate change particularly in the Northern parts of Ghana”, Mr Nkegbe told the Ghana News Agency.

Proposing the way forward to tackle Climate Change and Food Security in Ghana, the UNCCD National Focal Person stressed that healthy soil is the basic requirement for populations to cope with climatic irregularities and shocks. He indicated that sustainably managing the land and rehabilitating it, where it has been degraded, provides valuable co-benefits in terms of food security and preserving biodiversity.

Under the Sustainable Land and Water Management ( SLWM) practices, he mentioned the creation of Buffer Zones along various rivers, forestation, composting, minimum tillage, stone bonding, half moon, the Zai concept and creation of community reserves among others are highly recommended for adoption.

In conclusion it is quite clear from the above that land restoration and rehabilitation through SLWM practices is key to addressing the challenges of Climate Change and Food Security. During the launching of the Sustainable Development Goal (SDGs) in 2015, President John Dramani advocated strongly of Ghana’s position in promoting Agriculture which falls under the SDGs. Agriculture production could be improved through SLWM interventions. As suggested by the UNCCD National Focal Point for Ghana, the sheer extent of dry lands in the country especially the three Northern Regions offers opportunities for carbon storage and improved adaptation for poor rural communities if prudently managed. There is the need therefore for the Government of Ghana to focus more on the adoption of SLWM concept by encouraging and supporting more farmers to adopt the concept. Government led agencies such as the Ministry of Food and Agriculture and NGOs in the agriculture sector must champion the SLWM intervention to contribute to the reduction of climate change and food security. Already the EPA in collaboration with relevant state institutions with the sponsorship package from the Canadian Government just ended implementing similar intervention in the three Northern Regions under GEMP which has made considerable impact. There is the need to scale up the project.