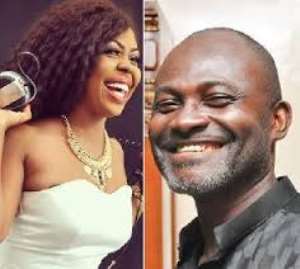 Recent war of words trending between Kenedy Agyapong and Afia Schwarzenegger cannot pass without criticism. Kennedy Agyapong is a known member of Parliament who enjoys immunity from his party NPP that he represents in the August house of lawmakers.

His party recognises him as a ‘god’ hence his insults on everyone pass by without reproach from even the flag bearer of his party. This time, he has gone too far! He has insulted the institution of womanhood and must be condemned and asked to render an unqualified apology.ghanapoliticsonline.com

Where did Afia Schwarzenegger go wrong when she questioned the basis of his attacks on the president, his brother and their late mother? And even if Kennedy Agyapong has issues with how Afia handled the issue, did he have to stoop so low as a member of parliament and a law maker?

Kennedy in his usual way of loose talk attacked the integrity of Afia Schwarzenegger to the extent of serious threats on her dignity as a woman. Can we just look on unconcerned as Kennedy attacks womanhood and nobody reprimands him?

It is indeed a common knowledge that the NPP worships him as a ‘god’ and would therefore sweep his remarks under the carpet, but what are women groups doing about this? Are women groups in Ghana like the Aglow, women fellowships of all churches, the women wing of all political parties in Ghana, etc going to treat Kennedy Agyapong as the ‘god’ he has been made to believe that he is??? This is a sad and painful situation that Ghananian women find themselves in.

Is Kennedy Agyapong also not a prostitute? Can one count the numerous women he has produced and is still producing children with? No one attacks or questions his choice of lifestyle as he is within his rights to engage in promiscuous affairs. So what right does he possess to tag a lady as “a prostitute”?ghanapoliticsonline.com

As a matter of principle, we must state for a fact that we are disappointed with the response of Afia after Kennedy’s initial attack on her. We expected her to at least address the issue at stake instead of insulting him back but for a member of parliament to stoop so low and attack a woman in such manner, we at least expect our parliament’s privileges committee that interrogated the likes of Black Rasta for talking against the honourable house to interrogate the member of the honourable who dishonourably insult a woman and a citizen of our beloved Ghana.

It seems women are under severe attack in Ghana lately and we are not the least happy with these happenings. The first lady of the nation who serves as a role model to most women in Ghana today was falsely accused of being the owner of DKM, a micro finance firm that is involved in some fraudulent issues though the real owners of the firm are in police custody and facing the law as at now. An issue of the late wife of the flag bearer of the NPP was raised by a newspaper recently asking if flag bearer of the NPP killed the wife.

The most recent attack on womanhood is Kennedy Agyapong’s attack on the late mother of the president and his siblings and his attack on Afia for asking why he came up with that attack. If dead women can be attacked and disrespected this much then God help we the women who are alive. We plead with all to respect and protect womanhood instead of attacking and disrespecting us because God created us to support men while men protect us. Are we trying to create the impression that Ghanaians don’t see the value of women anymore? Please those that still value womanhood should stand with us and fight this menace rearing its ugly head into our country lately.

Attack on a woman is attack on the nation!!!

Women of Ghana must arise and be proactive against the attack and derogatory remarks by Kennedy Agyapong!!!

Womanhood in Ghana is under threat!!!

Womanhood in Ghana is under serious attack!!!