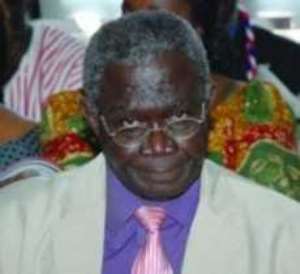 Former Member of Parliament for Asikuma Odoben Brakwa, P.C. Appiah-Ofori has urged Ghanaians to forgive Assin Central New Patriotic Party (NPP) MP, Kennedy Ohene Agyapong, for his foul-mouthed outbursts in recent times as he urges the party's hierarchy to call him to order.

The ex-legislator said the vitriol from the MP had left him so “sad” he was lost for words and would not be able to comment at that moment in time but urged Ghanaians to forgive him nevertheless.

“I am pleading with Ghanaians to forgive Kennedy Agyapong... They shouldn't judge all NPP members by his comments,” Mr. Appiah-Ofori told Accra News on Friday, February 5.

He urged the party's disciplinary wing to take action to curtail the lawmaker's public rants to give the party a good image, saying: “I am very sad. I think the party's Disciplinary Committee should summon him before it; otherwise, it will continue unabated. It's unfortunate. So they should call him and whip him into line.”