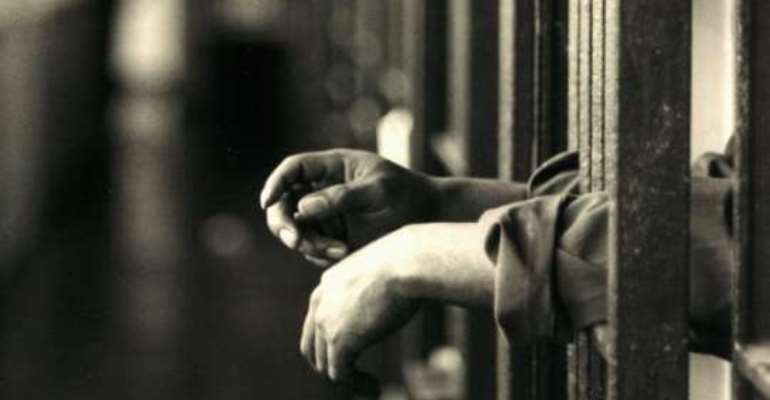 Accra, Jan. 29, GNA - A driver's mate was on Friday sentenced to 39 years imprisonment by an Accra Circuit Court for robbing a Police officer and another of cash, totalling GH¢7,100.00 and valuables at Galilea, near Kasoa.

Mark Keelson aka Ablode, a beneficiary of the Justice for All programme, pleaded guilty to the charges of conspiracy to commit crime and robbery.

Keelson who pleaded with the Court to deal leniently with him is said to have raped three women during the operations.

The Court presided over by Mr Aboagye Tandoh said it had considered his plea for mitigation and the six days he had spent in police custody.

According to the Court, Keelson ought to be punished because of the severity of the offence and the mode he adopted.

The Court noted that Keelson had no regard for fellow human beings and such he should be kept away from the society for a long time.

The case of the prosecution is that the complainants in the matter are six family members including the Police Officer, Chief Inspector Joseph Gariba and one Solomon Gborglah.

The case of the Police Officer prosecution said was that he was robbed of a Samsung Phone, laptop and its bag and cash of GH¢5,000 cedis. The robbers also took away Mr Gborglah's GH¢2,100 cedis, two mobile phone and four gold chains.

The families according to prosecution live at Galilea and Kalabule suburbs of Amanfrom in the Ga West Municipal Assembly.

Prosecution said Keelson resides at Kasoa.
On June 29, last year, between the hours of 12:40am and 2:30am, six men armed to the teeth stormed the houses of the complainants.

The prosecutor said the armed men forcibly broke into the complainants' room and amidst firing of guns took monies and valuables including mobile phones, laptops computers and jewellery.

During their operations three women were raped.
Prosecution said the matter was reported to the Police and full investigations were launched into the robbery attacks and two persons namely Isaac Kene and David Ahetor were arrested on July 1, last year.

During investigations, prosecution said a single barrel gun, locally manufactured pistol, and six rounds of live cartridges, face mask, and some of the items robbed from their victims were retrieved.

On July 17, last year, Kene and Ahetor were jailed 35 years each by an Accra Circuit Court while another member of their robbery gang was lynched by a mob at Kasoa.

On January 21, this year, the Police acting on intelligence, arrested Keelson at his hideout at Opetekwei and he admitted being a member of the robbery gang that robbed people in and around Kasoa.

Keelson disclosed that in this case he committed the robbery with one Edward Ayekple, another member of the gang who is at large.

Prosecution said when Keelson was rounded up by the Police, he pleaded for leniency.

Let's Avoid Second Wave Of COVID-19 By Following All Protoco...
19 minutes ago