Families Of Ex Gitmo Detainees Can Visit Them – Dep. Minister 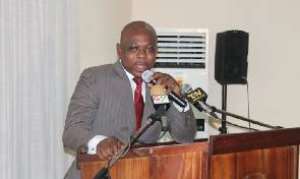 Mr. Agalga says although the two are on surveillance, their families are at liberty to pay them visits anytime they want to.

“The decision was taken for the two to be admitted into this country. Family members, whether they are Yemenis or whatever, if they have to come into Ghana, there are laid down procedures for the entry of foreigners into the country. You just have to comply with those procedures. If they are granted visas and they come and want to meet them, what is wrong with that? They are not going to be treated differently expect that they are under surveillance.”

He says the two will not be denied their freedom of movement such as visiting the mosques and the likes, although they will be closely monitored.

The decision to host the two detainees has been intensely criticized by many Ghanaians who argue that the two pose a threat to the country’s security.

But responding to these concerns, the Deputy Minister reiterated that government did a careful analysis on the two before deciding to host them in Ghana.

“We did an analysis and we found out the detainees will not pose a risk…Let’s consider the decision to accept detainees in the same light as other humanitarian gestures we have made.”

The two former detainees Mahmmoud Omar Mohammed Bin Atef, the 36-year-old Yemen citizen, and one of the two prisoners discharged by the United States from the Guantanamo Bay Prison to Ghana, is a one-time fighter for Osama Bin Laden, according to a December 28, 2007 report by the US Department of Defense.

According to documents published on the website of the New York Times, the man, who was transferred to Ghana on January 6, 2016, is quoted by the US Department of Defense as a former fighter of the terrorist group, Al-Qaida.

The second Ex-Guantamo prisoner also transferred to Ghana on January 6, is 34 year old Khalid Shaykh Muhammad, who according to 2006 documents on the New York Times website, lived his entire life in Saudi Arabia, although he claimed Yemeni citizenship.