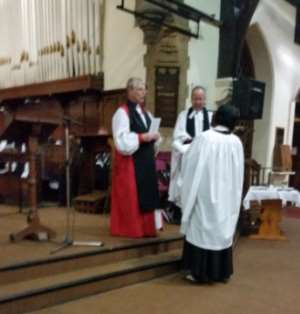 Although the Church of Nigeria, Anglican Communion, is yet to recognise women priests, it appears that the Church authorities in other countries would stop at nothing in their bid to ordain women into the priesthood. It also appears that the Nigerian prelate and his co-bishops would have to deliberate more seriously on whether or not they now want to recognise female ordination in the country as is the case with some West African countries like Liberia and Sierra Leone.

While they are busy sorting out the issues that may relate to the ordination or no ordination of women in Nigeria, some of their daughters have kept the flag of the country’s well established flair for the religious flying in distant countries. At least ten female Nigerians have been ordained as priests of the Church of England in the last decade in the United Kingdom.

On Tuesday 3 November 2015, St Matthew’s Church of England, Stratford, in the West Ham Archdeaconry of the United Kingdom recorded one more milestone in its long and very interesting history as the Resident Priest, the Rev. Lady Christiana Chidinma Asinugo was licensed by the Bishop of Barking, the Rt. Rev Peter Hill, as the Parish Priest and Associate Priest of St. John’s, Stratford.

Rev. Asinugo is also the Coordinating Chaplain of Westfield, Stratford International, said to be the largest Shopping Mall in the entire Europe.

She is the first woman from Imo State to be priested into the Church of England.

St Matthew, where the Rev. Asinugo is now Parish Priest, is an evangelical wing of the Church of England – a multicultural fellowship whose members come from the United Kingdom, Eastern Europe, West Indies, South America, Asia and Africa.

St Matthew envisions being a Centre from where the love of Christ would flow into the community around it. As a Church and the Body of Christ, the emphasis is to love God and to love one another, moved by the Spirit of God to bring His wholesomeness into the wider Community.

The licensing of the Rev. Asinugo as the Priest-in-Charge of the Parish of West Ham St Matthew, the celebration of her Ministry by the Bishop of Barking, the Rt. Rev Peter Hill and Installation by the Archdeacon of West Ham, Venerable Elwin Cockett, was very colourful and very emotional. There was also the commissioning of Westfield inSpire team, volunteers who speak the Word of God to sellers and buyers in the Mall.

The Bishop spoke about the harvest being plentiful, in an apparent reference to the evangelical challenges that face the Ministry. Quoting John 5:17, he said that humans cannot stop growing as God continues to work in the lives of His people. He said the baton had been handed over to Rev. Asinugo and that the primary agenda of the Ministry is evangelism.

The Rev. Asinugo thanked the Bishop for making time out to attend the event. She was also grateful to fellow clergy and especially the Archdeacon of West Ham, the Venerable Elwin Cockett, for showing so much love and support for her and her Ministry. Members of St John’s and St Matthew were not left out in her expression of gratitude.

Rev. Asinugo holds a Bachelors degree in Contextual Theology from Middlesex University and was ordained in 2009. She served out her Curacy at St Mary’s, Becontree and was posted to St Matthew as an Associate Priest in 2013.

This event is one more milestone in the history of St Matthew in which Bishop Hill left an enduring message and challenge with the parishioners: “Go and tell, but not until you’ve been and listened.”

The Rev. Asinugo is married to Chief Sir Emeka Asinugo, a London-based journalist and MD/CEO of R & L Limited, publishers of Imo Business Link Magazine and they have two grown up sons, Noble and Chima and two grown up daughters, Adanna and Ezinne.