The ‘Murder’ On Ghana Roads, Whose Fault? Part II 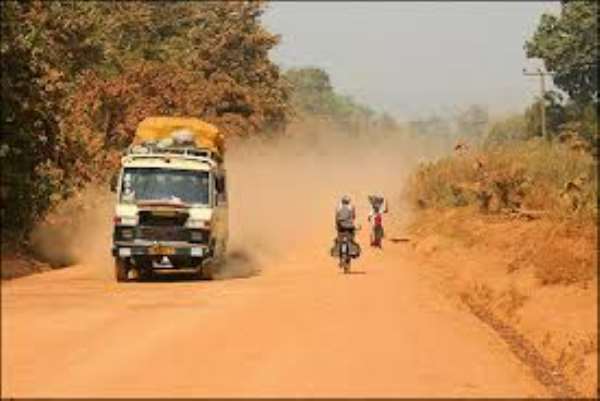 One will not find a single vehicle in Europe and America using springs in this modern era. Even tipper trucks which most often carries the heaviest loads, uses the air suspension system. In the United Kingdom (UK) for example, any vehicle using springs is made to pay more on road tax. This deters motorists from the use of springs in their vehicles.

What do we see on Ghana’s so-called roads? Most of these Chinese and South Korean made tipper trucks uses the old type springs and to add to the danger that these faultly designed vehicles pose on the roads, steering to the left or right is like attempting to eat ‘fufu’ with ‘shito’! One just has to visit a place like Budumburam in the Central Region and witness these death traps called tipper trucks coming from the sand weaning site on the minor road to join the main Winneba-Accra road.

These suicidal individuals parading as drivers can’t be bothered to stop and look left and right to ensure that it is safe for them to join the major road. They just drive in front of on-coming traffic without any apologies and carry on as normal! On countless occasions, such carelessness has resulted in ‘murder’ we in Ghana refer to as accidents, and no one is held accountable! The fact is that, due to the defect in the steering of these vehicles, they sometimes have to even reverse in the middle of the road just to be able to make the right turn, after having taken over the entire road just in the process of making a right turn and not a three point turn on the road. There is no way such death traps can ever be allowed to enter the EU market or America, since these governments value their citizens lives.

The solution to the above problem would be either to create standards for all goods entering the Ghanaian market in particular or the African Union (AU) market in general for manufacturers to meet, or compel most importers of vehicles into the Ghanaian market to source them from the EU market. One will never see a ‘Homowo’ truck or these 7.5 ton KIA trucks being used by the so-called pure water manufacturing companies in the EU. They can’t meet the safety and exhaust emissions standards of the EU. Some of these tipper trucks and KIAs, emit so much smoke that, driving behind them most often, is like being at a place where a bomb has just gone off or in a war zone! Until African governments places value on the lives of we Africans, we will continue to die in situations worse than fowls on our roads.

One just has to take a glance at the recent happenings at the Volkswagen (VW) plant in Germany regarding the exhaust emissions. That device fitted into those particular vehicles to circumvent the EU emissions test has led to the resignation of VWs Chief Executive Officer (CEO). In Ghana, there is nothing like an emissions test, because if there was one, more than 75% of the vehicles on Ghana roads, would take their rightful places at the scrap yards!

There are some water tankers selling water in Winneba and its environs. These include a Hino, Bedford, Isuzu and a Benz truck. All these vehicles when in motion, have the frontal part crossing the dividing white line in the middle of the road onto the path of oncoming traffic and the rear section virtually falling into the gutter on the nearside! These water tankers poses very serious danger to both motorists and pedestrians, but they go through the MTTU police check point mounted close to Windy Lodge in the mornings on the Winneba roundabout to Winneba town road. It is clear that, the roadworthiness certificates of these particular vehicles are procured through dubious means. Even if they have genuine roadworthiness certificates, can’t the police see the danger posed by these vehicles and take them off the road?

In other jurisdictions where the lives of the citizens matter, there are weight and height restrictions to ensure normalcy on the roads. Quite recently, an articulator truck from Burkina Faso bashed the overhead bridge on the N1 Highway located at the former ‘dimples junction’ as a result of loading far and above the height limit permitted for that bridge. The question is, is there a height restriction sign on that particular bridge or any prior warnings regarding a low bridge? Absolutely none!

Furthermore, there is the lack of the culture of maintenance of roads on the part of the authorities responsible for road maintenance. For example, there is a section of the dual carriageway from the Mallam-Junction to the Kasoa tollbooth which gets flooded with the slightest rainfall causing war-like scenes on that stretch of the road. This problem reared its ugly head following the construction of that road, but no one has bothered to correct that defect! It appears we do not have qualified engineers employed by the Ministry of Transport and its Departments and Agencies to take charge of the roads.

The road signs in this country also contributes significantly to ‘murder’ on Ghana roads. How can someone parading as an engineer or whatever designation, put up a warning sign regarding a hazard right at the spot where the hazard is located? This is the situation when it comes to warning signs regarding speed ramps or bumps. In civilized countries where there are well qualified engineers, almost all warning signs regarding hazards on the road are posted at least one mile prior to the hazard. However, in Ghana the sign is located exactly where the speed ramp or hazard is. This is stupid and unreasonable and whoever is responsible for this needs re-education in that subject area.

This lack of foresight with regards to warning signs on the road is right at my doorstep on the north campus of the University of Education, Winneba (UEW). It was mentioned in Part I of this article that, construction of the road leading from the main entrance of UEW towards the University Hall area, is currently ongoing. Most often vehicular traffic is diverted onto one carriageway of the dual carriageway now under construction. This creates a contra-flow traffic. The warning sign directing motorists to leave their normal carriageway and join the lane of the oncoming traffic to create the contra-flow traffic reads “turn right” or “turn left” instead of bear right or bear left. The first time I followed the “turn right” sign, it led me to nowhere!