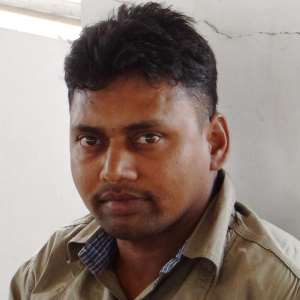 There may be many examples like Super 30 of Patna where children of daily wage earners are being trained to make it to elite higher educational institutions of India. These centres are mostly run by very qualified people. But in Kanpur Mahesh Pandey, who completed his Intermediate education and dropped out of a polytechnic in Ballia, Bachelor of 40 years of age, is helping children of brick kiln workers complete their school education and enter institutions of higher learning.

Vijaya Ramachandran, daughter of former President R Venkataraman and married to a Professor of Mathematics at IIT Kanpur, began a campaign to educate children at brick kilns and construction sites. When Mahesh joined her in 2006 she had been running 30-35 centres for about two decades. It was decided to provide an environment to some bright students among the children of labourers so that they could pursue higher education.

Chandan and Jamuna, both then students of class III joined the centre run by Mahesh in 2007 and Ashish, then a student of class VI, joined in 2008. The centres run by Vijaya Ramachandran, which currently number about 50, were called Apna School and this hostel, which was more a home for children, was christened Apna Ghar-Ek Kadam project. The children were admitted to Rama Krishna Mission Higher Secondary School in Kanpur city. The marks scored in High School by Sonu, Sagar, Ashok, Mukesh, Dharmendra, Gyan and Hansraj were 85%, 81%, 81%, 75%, 72%, 70% and 65%, respectively. Jitendra and Lavkush secured 62% and 65% marks from Jawahar Lal Nehru Intermediate College. Ashish scored 81% marks from Surja Devi Intermediate College in Kalyanpur. All children appeared and cleared their UP Board High School examination in first division.

Ashok, Sonu and Mukesh completed their Intermediate from Kailash Saraswati Intermediate College with 77%, 72% and 65% marks, respectively. Ashok has joined the 5 yr. B.A. - LL.B. at Lucknow University. Mukesh is currently a BA II year student at Kanpur University and Sonu has joined the B.Tech. programme at Bundelkhand University. Ashish, who secured 85% in Intermediate examination is an Indian Navy aspirant.

These children, all of whom were born at brick kilns and spent their early years among the dust at kilns often went hungry during day and had to spend winter nights without any cover, were lucky to have got the opportunity at home run by Asha Parivar and realise the importance of education in their lives. It is no wonder that all of them have performed so well in their studies. They know that their only chance to come out of the drudgery that their parents go through every day is through higher education. Hopefully, their generation will be able to enjoy better living conditions.

The man who changed their lives, Mahesh, who is both mother and father for them, is a source of inspiration for them and they hope that they will be able to return to society in the same manner as Mahesh has done for them.

(The author is a Ramon Magsaysay Awardee and noted social activist. He is a senior columnist with Citizen News Service (CNS) and can be followed on Twitter @Sandeep4Justice)