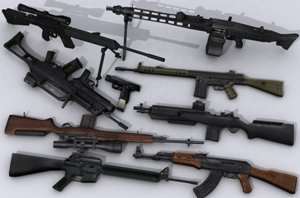 Geneva/Cancun, Mexico - The International Committee of the Red Cross (ICRC) has voiced concern that many countries are still involved in illegal arms transfers despite having committed themselves to an international treaty to regulate the flow of such weapons. The organisation says that hundreds of thousands of civilians are being killed, injured or forcibly displaced in conflicts fuelled by such transfers.

“I am concerned about the gap … between the duty to ensure respect for international humanitarian law in arms transfers and the actual transfer practices of too many States,” said the ICRC’s president Peter Maurer in a video address to be delivered to States which are parties to the Arms Trade Treaty (ATT), meeting in Mexico.

The ICRC is directly confronted with this gap in many countries, “where we witness the appalling consequences for civilians of the widespread availability and misuse of weapons,” said Mr Maurer.

This is the first such conference to discuss the treaty which came into force in December 2014. The assembled governments are to decide on mechanisms for implementing the agreement.

”If States are to join the Treaty but continue to transfer arms to belligerents with a record of war crimes or serious violations of human rights, this would severely undermine the ATT’s humanitarian purpose and its credibility,” the ICRC president said.

The ICRC has expressed deep concern about the threats to medical and humanitarian assistance posed by such weapons in conflict- or violence-affected areas such as the Central African Republic, Syria, Iraq and South Sudan.

Mr Maurer called for a high level of transparency and robust national control systems to curb the availability of conventional weapons and stop their diversion to illicit markets. The treaty, which has been signed by 59 states and ratified by 72 states, covers everything from small arms and ammunition to battle tanks, combat aircraft and warships.