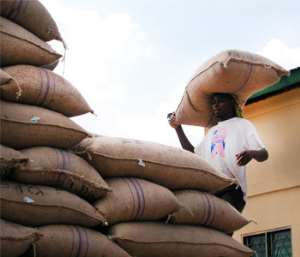 Kuapa Kokoo Limited (KKL), a licensed buying company, has exceeded its cocoa production target even before end of the 2014/2015 crop season.

This was disclosed at the 21st Annual Delegates Conference of the Kuapa Kokoo Farmers Union in Kumasi.

“The Kuapa Kokoo Farmers Union will continue to support Kuapa Kokoo Limited by resourcing them and also ensuring that they adhere to Fairtrade standards. It is the duty and obligation of all members of the Union that we sell our produce to KKL in order to strengthen our own LBC,” said Madam Fatima Ali, President of the Union.

Despite operational challenges faced, the crop year saw a remarkable performance of Kuapa Kokoo and its activities since the company was established in 1993.

The Ghana Cocoa Board (COCOBOD) has commended the company for its performance and prompt payment of loans.

Kuapa Kokoo currently has 6.9% market share of Ghana’s cocoa output. Membership of its farmers union has increased to 100,500 across the Ashanti, Central, Eastern, Western and Brong Ahafo Regions.

The Kuapa Kokoo Farmers Union also owns the biggest share of 44% in Divine Chocolate Limited, based in the UK with a franchise in the USA.

According to Managing Director of Divine, Sophi Tranchell, “the figures for 2014/2015 are looking even more promising. Our business in the USA, which was established in 2007, saw even better growth, and at the end of the year was close to making its first profit”.

The 21st Annual Delegates Conference was on the theme: “Deepening Decentralization through the Cooperative Way… A Vital Tool for Farmer Development”.

Accra: One Killed As 4 Cars, 2 Motorbikes Collide At Anyaa
6 minutes ago

Delaying To Release Seed Funds For Purchase Of Cocoa Unprece...
59 minutes ago