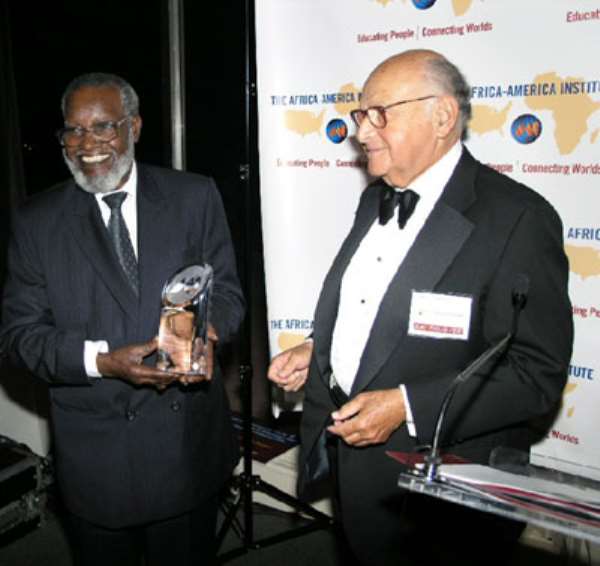 ...by Two Prominent Ghanaians & Africa-America Institute UN HEADQUARTERS, NY -- He was honored in Ghana in July with the highest national award of the Companion of the Order of the Star of Ghana. President John Agyekum Kufuor decorated President Nujoma when he came on a three-day State visit to the country. Nana Addo Dankwa Akufo-Addo, Minister of Foreign Affairs, read the citation at a State banquet held in honour of the great leader. The citation read: "You are being honoured for your dedicated and selfless devotion to duty to the people of Namibia and your role to set Africa on the path of peace and sustainable development". "It is your avowed aim to liberate your country and Africa and in recognition of your untiring leadership role, contribution to Africa's liberation, peace and stability and your role to deepen the bond of friendship between Ghana and Namibia". Two months later in NY at the UN headquarters yesterday (September 20th, 2004), he was honored again. Mr. Charles Nimmo N. Mensah aka Mr. CNN of Ghanaweb was invited by Mr. Kofi Boateng, a prominent Ghanaian and the Chief Operating Officer of Africa-America Institute to join in the celebration of the AAI National Achievement Award to President Nujoma. Maurice Tempelsman, Chairman Emeritus, The Africa-America Institute presented the award to President Nujoma.
Among the team which coordinated this event was Kofi Appenteng, Chairman of the Board of Trustees of AAI. He and Mora Mclean introduced the dignitaries. Special invited guests included, Kwabena Manu aka Honorable Pancho, Nana Amo Adjapong. Dignitaries included the Presidents of Mozambique, Zambia, representatives from other Countries, US Congressman Donald M. Payne of NJ, David Dinkins, former New York Mayor, Andrew Young, former Atlanta Mayor and UN Ambassador and many others. The event was also a $500 a plate fundraising dinner for the AAI.