Did Sudan's Omar Bashir flee from arrest In South Africa or...? 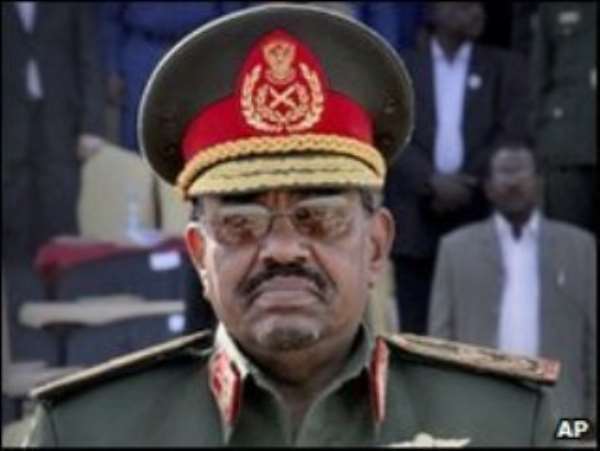 Folks, those of us who have been critical about the one-sided activities of the International Criminal Court (ICC) haven't hidden our concerns about its fixation on only African leaders or politicians and their prominent backers in its hunt for so-called war criminals. We have made our voices heard and accused the UN itself of being at the beck-and-call of those funding it to turn a blind eye to the horrendous happenings involving them.

Any talk of war crimes will not be complete without the inclusion of happenings in Libya, Iraq, and many others for which the real war criminals are known but remain untouchable. The UN's blind eyes don't see them nor do its deaf ears hear the cries of living victims or the relatives of the perished. Whole countries and systems not working in favour of the paymasters of the UN have been devastated and turned into breeding grounds for terrorism (Libya on my mind now!!); yet, the UN is so narrowly focused on pursuing African leaders as to make itself irrelevant to Africa in our time.

The focus is on Sudan's Omar Bashir, who left Khartoum for the Africa Union conference in South Africa and was given a rousing welcome there. On the flip side, the ICC and the UN's ever-sleeping-on-the-job Ban Ki-Moon called for his arrest and a Pretoria Court went ahead to issue an order restraining him from leaving the country.

By the time the Court gave its verdict for his arrest and consequent transfer to the custody of the ICC, Omar Bashir had left the country and returned to his safe haven in Khartoum. How he left confounded the South Africans; but information revealed that the plane took off from a military base in South Africa. An earlier manifest on passengers leaving didn't have Bashir's name.

I don't know if the AU conference is still going on; but I know that it was the AU that invited Bashir to the conference. Was it a trap set for him so he would be arrested and handed over to the ICC? Not at all, clearly because the AU itself is strongly opposed to the manner in which the ICC does things as if Africa is its sole purview. Although many African countries (including South Africa) are signatories to the ICC charter on war crimes, their stiff opposition to the modus operandi and purview of the ICC makes me believe that the AU wasn't in any position to entrap Bashir.

His departure from South Africa is said to be poised to create a constitutional problem for the country. Whatever the consequence may be, Bashir is back home. But did he cut short his stay in South Africa to evade arrest? A clever move or a cowardly one?

What would have been the implications for Sudan and South Africa had Bashir been arrested and handed over to the ICC as being demanded? And by slipping out of the country, has Bashir put South Africa in a bad light to attract sanctions from the international community?

Whether the South African government is bracing up for any sanctions or not, the fact that Bashir wasn’t arrested by it on its soil speaks volumes to ginger up action against the ICC’s narrow focus on Africa. In a world torn apart by the bellicose posturing and flexing of military muscles by leaders using their countries’ military, political, ideological, and economic capabilities to torment others in the name of an elusive democracy, any fixation on happenings in Africa (as has been the case all these years despite persistent protestations) renders the UN and its ICC mere lackeys of the real war criminals who are being shielded by their powerful systems and allies. It is awfully glaring!!

African governments/leaders must not just condemn the ICC over its biased attention toward them (or at least, those among them targeted for arrest and prosecution as war criminals). They must not indulge in the kind of dry rhetoric that won’t change the focus of the ICC. They need to come together to take concerted actions for a drastic change so the ICC can operate globally, not only against them in Africa. Only then will their complaints against the ICC and refusal to do what Bashir has run away from be meaningfully registered and felt. Only then will the UN and its backers re-consider the tactical manouevres of the ICC against war criminals. Anything short of that will not bring about the change that African leaders expect to see in the ICC. Truly, Bashir has given us something to ponder.

Radio Gold, XYZ, others yet to receive re-authorization lett...
55 minutes ago