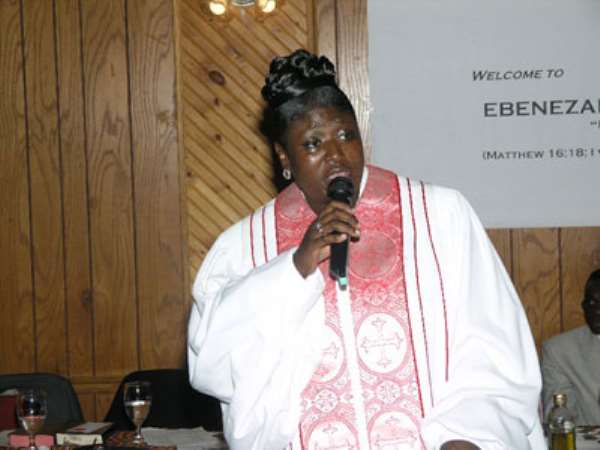 When God showers his blessing upon his children, the blessing does not stop, it continues and continues endlessly. Many who have received the God's enormous blessings can attest to that. Imagine you exhibit the God given talent in music, you launch a great CD entitled “Praise Him”. After the CD launch, God says I would give you a church and you would run it because you have been obedient, humble and faithful to him. This wonderful story is attributed to a Ghanaian based in New Jersey who needs no further introduction because her great CD is featured on Ghanaweb's Entertainment news Spotlight. “Praise Him” is now “hot like fire and making great noises” and has been also featured on Ghanamusic.com, Ghanatoday.com, Amandla newsmagazine, NJ, would be featured in Goldstar Herald newspaper in Atlanta and others. All proceeds of the CD sales are going towards charities in Ghana. Audrey Maison is giving back what God has done for her and encourages everyone to give, because when you give, you shall receive God's blessings endlessly.

Let us fast track to the real story which this article is about. On August 15th, 2004, history was made; a new church; Ebenezar World Outreach Church was born at the American Legion Hall, 43 Oakland Avenue, Edison, New Jersey, and a new Pastor was also ordained in the person of God's own anointed, Pastor/Prophetess Audrey Maison formerly known as Ms. Audrey Amankwah. This occasion was highly attended by dignitaries from all walks of life and from different regions of continental America. The ceremony itself was solemn and spiritually activated by the performances of Pastors, Ministers of the Lord and gospel singers, musical artists and above all Broadway and ballet performers. It was an unusual event and one needs to be present to see and appreciate God's glory at work.

The occasion and the ordination itself was performed by non other than the newly explosive and highly anointed very young end-time Prophet Edmund Nana Yaw Obeng from Holland (Destined to be the “Ghanaian Bishop T D Jakes). This man of God has been preaching the word of God and performing miracles in churches and crusades all this summer in the United States stretching from Atlanta to the New York and New Jersey areas. He has been preaching the word of God not only in Ghanaian churches but also African American and Haitian churches. It was only divine that God selected His servant that day to inaugurate and ordain His new church and His new Pastor.

The ceremony started with Praise and Worship performed by the "Judgment Day" band headed by Felicity Amoah and Joe Mens after opening prayer by Pastor Adams of New York. The worship was called for congregational participation and the Spirit of the Living God became present. The Praises energized the congregation and brought everybody to their feet with joyful songs sang both in English and Ghanaian dialects. The Master of Ceremonies in the person of Minister Francis Kodua was highly functional, directive and informative.

Prophet Edmund Nana Yaw Obeng took control of events at this period. Through Biblical and specific scriptural quotations he called the occasion to order and unveiled the plaque to bring into spiritual being of another of God's mission; the newly founded Ebenezar World Outreach Church. Some members of the congregation were very particular with the spelling of the word Ebenezar and thought there was a typographical error but they were quickly corrected that the "a" in the spelling instead of the "e" stands for 'Anointing". Praise God.

The inauguration was quickly followed by the ordination and this was the moment where family members and friends became emotional and shed tears. They have known the then Audrey Amankwah and the long road she had traveled on to salvation. Prophet Edmund Obeng made all present realized that the calling of God was not to be taken lightly. The commitment was far serious than a wedding ceremony of a virgin bride. It started with the washing of feet, the dawning of the priesthood gown, the exchange of vows and wearing of the priesthood ring and finally the anointing with the oil. The process cannot be described by words but needs only one's presence to appreciate the rare observance of pastoral ordination.

A very powerful musical performance followed the ordination by a visiting Ghanaian musical producer known as Max Morris. This performance brought the whole congregation to a standing ovation which ushered in the newly ordained Pastor /Prophetess Audrey Maison to give her first message. The spirit of the Living God took control and for a brief fifteen-minute period, Pastor Audrey Maison took the congregation by storm and delivered one of the most powerful and inspirational messages given by any new Pastor according to those who have observed these occasions. It is still being talked about in the pastoral circles that God has chosen a new powerful servant in a woman to do His wonderful work. The mere fact that her message was brief made the audience yearn for more but she promised them that there will be better messages ahead so they should continue to come and I believe this will spur a sudden rush in the community to come listen to this new messenger. Her performance is compared to those of T.D. Jakes, Paula Jones and other African American pastors. Her message was simply titled. "It shall be well with you" and it was certainly well with the audience.

Another musical performance by African-American Broadway Star Ethel Barnes who sang an opera type music and danced to it by her renowned ballet-dancing daughter Cory brought chills and tears to the eyes of the congregation and by the time she went through the ordeal the Holy Ghost had taken over the congregation and Prophet Edmund Obeng took control immediately and also delivered the most scintillating and most practical message titled "Oooppps!!!! There it is”. Do I need to elaborate on this performance? You need the tape to see this "man of God" and his oratory. He followed his message with accurate prophetic ministrations and that is his specialty. Several people got their anointing that day and I do believe that a whole story has to be written about this young prophet.

Mr. Charles Nimmo N-Mensah aka Mr. CNN of Ghanaweb fame who is also a school mate of Pastor Audrey Maison also came to offer his support. The occasion ended with a fund-raiser for the church, an alter call, closing prayer by Pastor Adams and a light refreshments. Prophet Edmund Obeng had earlier read to the congregation the history of the newly founded church and is hereby attached for the perusal of those who might be interested in knowing God's call.

Let's all give thanks and glory to the Almighty God for the wonderful thing He did that day. God bless you all.

We're going to establish a guinea fowl processing factory he...
2 minutes ago

Election 2020: I was very disappointed with the results in U...
24 minutes ago