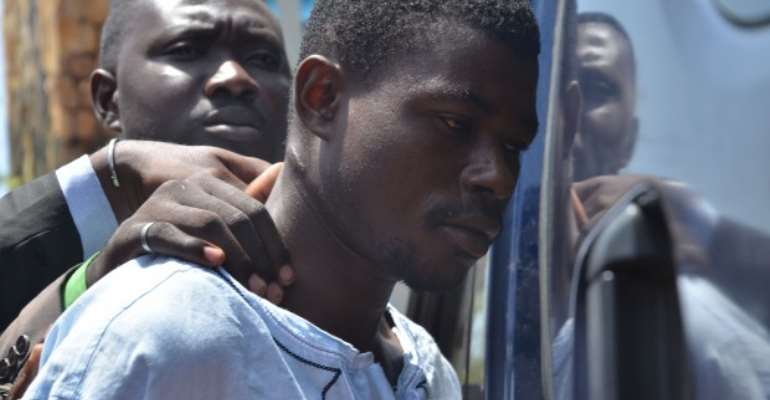 CONFESSION! Anokye Yaw Frimpong
One of the six persons arrested in connection with the murder of two African Americans at Fihankra near Akwamufie in the Eastern Region has confessed to the crime.

Frimpong, who was being tried for murder, as a result pleaded with the trial Magistrate to free the other accused persons because they were innocent.

Murmurings
Frimpong's confession came minutes after another accused person, Nana Obiri Yeboah, a farmer and fetish priest, who was showing signs of insanity by murmuring to himself, was ushered out of the court in order not to disrupt the proceedings.

Charges
Also in the dock for the charges of conspiracy to murder and murder were Nana Appia-Nti III, mechanic; Brenda Kareema Mohammed, a pensioner and her son, Yazid Alazim Mohammed, a businessman and Mensah Kamaugogo Muata, a Surgeon Assistant.

It was the case of the persecution led by ASP Stephen Adjei that the accused persons between 4th and 5th May 2015, at Fihankra near Akwamufie in the Eastern Region, did agree and acted together with a common criminal objective to commit crime to wit murder.

No Bail
In spite of Frimpong's confession, the court presided over by Veronique Manfort threw out the application for bail filed by lawyers for the accused persons.

The trial Magistrate, in a ruling, was emphatic that the court did not have the jurisdiction to grant the bail.

Ms Manfort said the police must expedite their investigations into the case to ensure that the accused persons were not unlawfully detained for long.

Psychological Assessment
The trial Magistrate further ordered that Obiri Yeboah be sent to the Accra Psychiatric Hospital for examination.

Ms Manfort stated that when a report is issued on the accused, the court would then determine whether or not Obiri Yeboah was fit to stand trial.

The case was adjourned to May 28, 2015.
It would be recalled that the Akosombo Police had mounted a search for the two deceased Americans after they were reported missing.

The search led to the discovery of a freshly-dug grave about 150 meters away from Frimpong's maize farm in which bodies of the deceased, who were pensioners from the American Civil Service, were discovered.

According to the facts presented by ASP Adjei, interrogations led to the arrest of the accused persons; and Frimpong, 24, confessed to the crime while the others denied their involvement.

Anokye Frimpong, after confessing, demonstrated to the police how he murdered the two sisters after which he buried their bodies in a shallow grave.