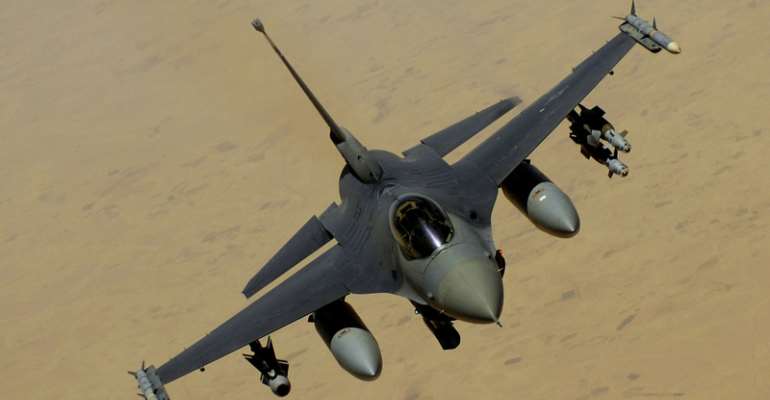 Al-Massirah television station in Yemen which supports the Ansurallah Movement (Houthis) broadcast news reports on May 11 showing civilians standing around a downed F-16 bomber utilized by Morocco in the alliance currently waging war on this Middle Eastern state.

The fighter plane produced in the United States by General Dynamics Corporation is the same aircraft utilized by other members of the Saudi Arabian and Gulf Cooperation Council (GCC) waging an aerial war against Yemen, the most underdeveloped state in the region.

Morocco, one of only three remaining monarchies still reigning over societies on the African continent, joined the alliance "to restore legitimacy in Yemen" from the very beginning of its inception in late March. This decision to join the war against Yemen was made by King Mohammed VI absent of any consultation with the parliament. (The Australian, May 11)

Reports indicate that the Kingdom has provided six aircraft to the Saudi-GCC operational command, although there is virtually no information being disclosed about the North African country’s involvement. These F16 jets appear to be the same that participated in the Pentagon-led strikes against the Islamic State in Iraq and Syria.

War Kills and Maims More Civilians
Since March 26, the Saudi-GCC coalition has dropped an undetermined number of ordinances on Yemen in a failed attempt to destroy the Shiite-based Ansurallah forces which has formed an alliance with other political interests to oppose Washington’s attempt to control this nation through Riyahd. This imperialist-backed coalition which receives logistical and intelligence support from Washington has intensified its bombing campaign against Yemen in an attempt to reinstall the fugitive President Hadi who now lives in exile in Saudi Arabia.

According to an article published by Press TV on May 11, “Saudi aerial attacks on the impoverished Arab nation continue to claim lives. In the latest raids, Saudi warplanes targeted the northwestern city of Ta'izz injuring 11 people. Earlier, Saudi jets attacked targets in Sa’ada and Hajjah provinces, killing at least five people. They also pounded a district in Bayda Province, leaving two people dead.”

Also on May 11 it was estimated that 11 people were killed and more than 160 injured as Saudi jets struck an arms installation in the capital city Sana’a. These raids bombed a depot in the al-Naqam area located in the eastern outskirts of the capital.

Media reports state that the raids set off numerous explosions which scattered pieces of artillery, with one crashing into the roof of a residential structure. In the aftermath of the attacks, clouds of smoke blew into the sky from the site and additional materials were scattered across other neighborhoods in other sections of the city. (Press TV, May 11)

Several days before on May 7 the Saudi foreign ministry announced a 5-day pause in the bombing to allow relief to be delivered to the people impacted by the bombing and the fighting on the ground. The Saudi-GCC alliance gave the Houthis an ultimatum that they must stop their resistance efforts against the bombings or face more aggressive military attacks.

This announcement was made by Riyadh during a visit by U.S. Secretary of State John Kerry. The top Obama administration envoy said that Washington supported the war against Yemen and made threats against Iran which is politically supporting the Ansurallah Movement (Houthis).

Just minutes later Kerry then said that there should be a ceasefire in the fighting and that the U.S. would supply $68 million humanitarian assistance to Yemen. This purported aid was designed to provide food, water, shelter and medical care to the people in the warzones of Yemen.

Kerry said in Riyadh of the U.S. foreign policy related to the war that "We have urged all sides, anybody involved, to comply with humanitarian law and to take every precaution to keep civilians out of the line of fire, out of harm's way, as well as to provide the opportunity for humanitarian assistance to be able to be delivered. I think this would be welcomed news for the world if it were able to be effected in a way that does not see people try to take advantage of it and either secure more territory or attack people participating in a legitimate pause." (VOA, May 11)

After visiting Saudi Arabia, Kerry then went to the Horn of Africa nation of Djibouti, which houses the largest Pentagon military base on the continent at Camp Lemonnier. The government of Djibouti has done more than the U.S. itself in evacuating distressed people attempting to flee the war in neighboring Yemen.

Although the U.S. has reached a "deal" with Tehran over its nuclear technology capabilities, the hostility towards the country continues. Many observers believe that the current war against Yemen is designed to weaken the burgeoning influence of the Islamic Republic of Iran throughout the Gulf region.

Several attempts by Iranian vessels and planes to provide assistance to the civilian population in Yemen have been rebuffed by Saudi vessels backed up by U.S. warships operating in the region.

Tehran however has reiterated its commitment to address the situation in Yemen. Press TV reported on May 11 that “Iran’s Foreign Minister Mohammad Javad Zarif says the Islamic Republic is prepared to provide Yemen with any humanitarian aid and help the impoverished state work out a political solution to the ongoing crisis there.”

Iranian Foreign Minister Zarif said at a combined press conference with South African Minister of International Relations and Cooperation Maite Nkoana-Mashabane in Tehran that “Since the beginning of the crisis in Yemen and the start of the illegal attacks on the country, the Islamic Republic of Iran has explicitly announced that the Yemeni [crisis] cannot be settled militarily and that these attacks will have no outcome but the killing of defenseless people.”

At the same time a civilian-based international effort is underway as well to provide aid to Yemen and highlight the humanitarian crisis created by a failed imperialist policy towards the Middle East. This effort which is supported by U.S.-based antiwar and peace groups was announced at the recently-held United National Antiwar Conference which took place in Secaucus, New Jersey during May 8-10. The conference attracted hundreds of activists representing numerous organizations across North America, Europe and the Middle East.

In a press release issued on May 11 by the New York-based International Action Center is says “A ship containing over 2,500 tons of flour, rice, and medicine is departing from the Islamic Republic of Iran on Monday. The delegation of doctors, journalists, and activists organized by the Red Crescent Society of the Islamic Republic of Iran intends to deliver this much needed humanitarian aid to the people of Yemen, who are facing a horrific bombing campaign from Saudi Arabia.”

This same statement went on to note that “Joining the Iranian volunteers is a delegation of anti-war activists from the United States. Caleb Maupin, an organizer with the International Action Center (iacenter.org) Fight Imperialism Stand Together (fightimperialism.org) and the United National Anti-War Coalition (unacpeace.org ) will be aboard the ship, along with other activists from Europe and the United States, including Tighe Barry from Code Pink (www.codepink.org) and Cyrus McGoldrick, a U.S. Muslim human rights activist.”

The IAC statement noted that if this ship is attacked by hostile forces it will be the duty of the antiwar movement in North America to protest such provocations vigorously. These developments are serving to awaken the anti-imperialist and peace movements in the U.S. to pay closer attention to the Washington supported aggression against both Yemen and Iran.

Free SHS Graduates Gather To Campaign For NPP
7 minutes ago