Pile On The Pressure 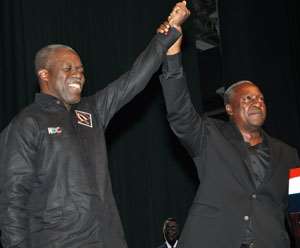 It's beginning to gel. Angry compatriots are growing in their numbers. My compatriots, who are angry with the rot of a congress thinking and doing, are voicing out their frustrations. In my view, the more the better and let those who feel reluctant, shy or threatened join. All must join to get us light now; not promises.

It is easy to plug your ears and say to yourself me ntie obiaa. It is easy, because you are saying what you will not do. Assuming you think something that attracts your ear is noise and therefore you will not listen to it, that's your business. But remember it is not up to you but up to the noisemaker to not make the noise that you don't want to hear for you to be able not to hear.

For as long as the noise continues, you have little choice between hearing and not hearing. You may choose to try not to listen but as for hearing you have no choice. You cannot remove or take out the space through which the 'noise' signals travel. Neither can you block those signals from attacking your tympanic membrane. So you are just being wishful if you go round singing you won't listen to anyone. Listening and hearing are two different things.

You don't have to listen to hear. And for as long as that option exists for those who make, or want to make the noise that you don't want to listen to but they want you to hear, they exercise the option to make you hear when you won't listen.

The instance of a mosquito (the actual one not the egg-of-block laying one) and noise is instructive. Those who know say it is the female mosquito which makes the buzz and bites by the noise to disguise the pain of bite. 'They love to buzz before they bite.' And we all know you don't choose to listen to the mosquito. It will always ensure you hear it. 'With their wings, the female mosquito makes annoying buzz or whining sound.'

Such knowledgeable experts add that 'only female mosquitoes make that annoying sound that puts you on red alert.' Had the dead goat man known this, I am sure he would have asked whoever thought he has the mouth to say not nice things about female celebrities to have minded his business.

Because, now that he has stepped on the toes of the celebs, calling them names, he can be sure they will strike back. If he gets unlucky, it will be a vicious strike back of bites that inject life destroying malaria poison or plain simple death.

Me, though, it gladdens my heart. It gladdens my heart that rather than sit aloof and sulk to sickness in intolerable darkness plus insults, compatriots are now readying for piling on the pressure for light now. It is so refreshing insulted women celebs and their colleagues are ready to join the noisemaking somebody says he will not allow himself to be bothered by. He says no noise is enough to bother him because he will ignore it.

To get light now, the pressure should be unrelenting. Give us light now must be pursued relentlessly. I think it's a lie when he says he cannot be bothered by noises of demonstrations, processions and strikes. Really he would worry about crowd expression of disapproval of his lack of commitment to providing electricity, preferring more darkness less light attitude towards energy solutions. If, indeed, he doesn't care, it is because not enough noise has been made.

Frightening bank raids, payroll fraud, divestiture thieving schemes, contracting loans by heart, and looting the treasury have all come to pass with little outrage shown. Compatriots, who are irked and hurt, have had their rights toyed with and therefore fed up with underachieving, if they achieve at all, congress.

Black May Vigil is now here after the all-powerful OccupyGhana had introduced Red Friday. Let labour unions wake up. Let Commonwealth, Unity, Atlantic, Katanga, Okponglo, Casford and all the halls rise up. Damn it; that thing called campus connect. The motherland cries for the yesteryear heroism of the student movement. Vandal saviours of the motherland, where are you?

The motherland was once served well by NUGS, Association of Professional Bodies made up of lawyers and the pharmacists, doctors, architects, engineers, accountants, teachers, nurses and others. They rose up and defeated the might of a drifting military. Let them rise again to challenge the suffocating thieving activities of corrupt congresspeople. Let them rise against the suppressing, insulting, oppressing and corrupting congress governance.

With celeb Black May Vigil on board, it could be the turning point of intensified noise that would compel he, who otherwise would not have listened, to listen and immediately bring light.

Vote Based On Akufo-Addo's Records — First Lady
3 minutes ago

A/R: We Won't Accept Independent Candidates Back – NPP
3 minutes ago