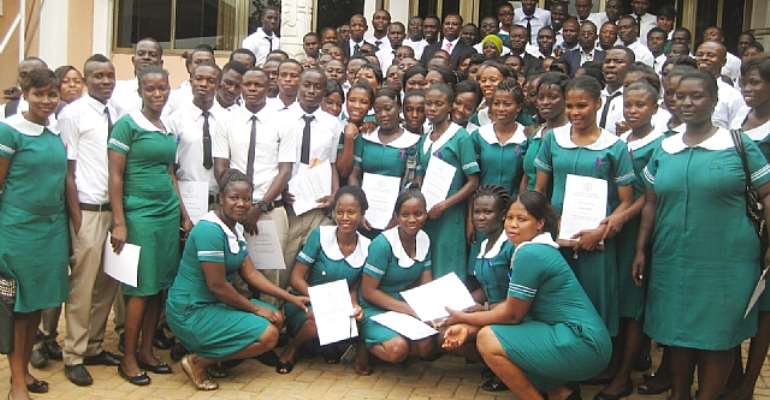 On the occasion of May Day, a day for commemoration of workers' efforts through out the world, I bring you some challenges I face as OPD nurse.

OPD is the heart of every health facility and nearly all patients coming to the hospital will pass through your hands before been assigned to a ward. Technically speaking, we are all-wards-in-one.

The pressure at OPD knows no season as it receives and distributes patients to their respective wards based on their conditions. Many a time, you go to work and you have to stand for the whole day.

I realised the difference between "report to" and "report at" work when I was reassigned to OPD. The former means to go to work to meet work waiting. Sometimes, one doesn't even have the luxury to change into the nursing gear, pray or eat.

If you're on night duty at the OPD, then you're dead. Whiles other nurses might have a sound rest at night, the OPD nurse can't even stretch a minute. Many a time, on night duty, I can attend to patients throughout the night at ugly hours. And the most annoying aspect is when the person is not even sick.

OPD nurses are viewed by patients as know-nothing nurses. They feel our primary responsibilities is to do documentation and check vital signs. A task presumably they can perform. Yes, it doesn't require robotic science to take one's temperature, pulse, BP and weight. That's a simple task even "uneducated minds" can do. Even some elite patients have these vital signs toolkit at home.

The OPD nurse is the smartest of all nurses. If you're a slow nurse, you will adapt and appreciate the essence of speed as patients "ambush" your facility with deteriorating baseline values of the body system. The OPD nurse doesn't require the doctor for interventions pertaining to most critically ill patients and accident victims.

Countless times, critical patients are canullated and infused, catheterised, nebulised, sponged down, CPR-ed stabilised, sutured et cetera at the OPD's triage before sending them to the ward level.

Amidst all the Wahala, OPD nurse are the most vulnerable to the outrage of the public, patients, patients' relatives and sometimes facility authorities. The probability that a nurse will be beaten at a health facility will come from the OPD. For swear words, acerbic tongues and curses, the OPD nurse is soaked enough.

The greatest pain of all is when your superiors in many instances think you're not putting up your best simply because one out of a million cases went inappropriately. That's is very demoralizing!

I'm very patient. I'm sure about that but these scenarios made me lost my temper.

Case 1. A patient on a wheel chair arrived at the OPD. I asked the patient if I could take the weight. The patient relative burst into anger: "What are you going to do with the weight? Someone is in pain and you're talking about weight."

Well, the patient relative doesn't know that patients' drug dosage are not given based on age but weight. (Few exceptions).

Case 2. A motor accident was brought to the OPD. I ordered the relative to go and pick a folder. The patient lost it with me: "Aaah, because of these small wounds you want me to go for a folder. Why can't you dress them and give me some drugs to go home."

Hmm, all patients who come to the facility MUST take a folder. The folder doesn't only keep medical history of the patient but it establishes a legal contract between the patient and the hospital. At the hospital, I'm very careful handling patients without folders though not oblivious of pertinent nursing interventions. Again, if it's not documented, then it never happened.

Case 3. A patient was rushed in with knife in-situ injury. We were handling a child with a temperature of 40.1 °C. Everyone around felt we should've left the child for the brought-in with knife in stomach. People at the OPD were outraged and started calling us murderers. It was night duty of only two nurses.

Allow the nurses to work. They know their left from right. A knife in stomach will only cause pain and pain technically speaking is not emergency. A first year nursing student knows that temperature is not anything one must joke with. Most complications caused by temperature are not reversible. (Read: denature of proteins secondary to temperature). Even if it was a spear on the forehead, we would still not attend to him at that moment.

NB: What the public think is an emergency might not be an emergency in the realm of cases a nurse is confronted with at a given time and place.

Case 4. Two strong men entered the OPD. One of them without greeting said, "Emergency! Hurry up!". I got up and went out to see the emergency. I saw nothing. I came back and they said "they" were the emergency. "We had an accident", one said. I asked one of them to go for their folders. The bossy man charged, "Nonsense! Don't be stupid. Do you know who am I? Is it because of my outfit?" Apparently, he wanted one of us to go for the folder.

I also charged ready to prove to him that a short man is not a boy. "Who are you?", I retorted boldly, "Are you John Mahama or Bokum Banku?". "Mtcheww", I hissed whiles going to take my seat at the nurses table. "We are not slaves here. Do you think you will meet anyone here if nurses will go and queue to pick folders for every patient?"

Case 5. I was to give this girl an injection on the buttocks. She was just acting and giving me an attitude close to five minutes. May be she didn't want me to see her buttocks. She suggested I pass needle through her pants to the buttocks.

"Please, I don't take delight in watching patients buttocks. Besides, I have seen bigger and fresher buttocks than your peanuts. Please let me do my work and attend to others.", I gave it to her.

She vexed. I vexed too!

God bless all nurses especially those at the OPD.

Odododiodoo: ‘Impotent’ Police Cause Of Constant Clashes – ...
24 minutes ago