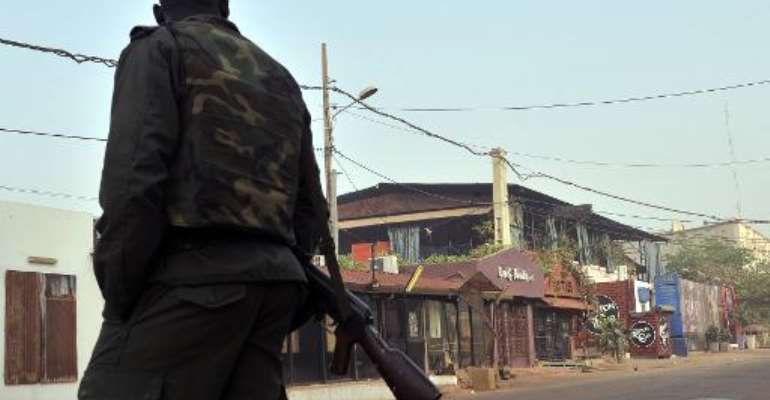 A member of the security forces stands in Bamako on March 7, 2015. By Habibou Kouyate (AFP/File)

"More than 50 armed men from the Coordination for the Movements of Azawad (CMA) came Thursday to sow terror in Bintagoungou. They killed a man and took six hostages with them," said Hama Aboubacrine, mayor of the town about 90 kilometres to the west of Timbuktu.

"Everyone knows each other here. (The attackers) had a CMA flag," added the mayor.

The gunmen also pillaged several shops and a pharmacy, and made off with two vehicles.

A Bintagoungou resident also told AFP that his father was one of the six who were taken hostage.

CMA officials were not immediately available for comment on Friday, but a UN peacekeeping source in Mali also confirmed the attack.

Mali was upended by a coup in 2012 that opened the door for Tuareg separatists to seize the towns and cities of the vast northern desert with the help of several Islamist groups.

The Tuareg were then sidelined by their one-time allies, extremists who imposed a brutal version of Islamic shariah in the region and destroyed historic buildings and artifacts in Timbuktu.

The Islamists pushed south toward Bamako, prompting France to deploy troops in January 2013 who drove them out, and Mali returned to democracy with the election in August of President Ibrahim Boubacar Keita.

The country remains deeply divided, however, with the impoverished north home predominantly to lighter-skinned Tuareg and Arab populations who accuse the sub-Saharan ethnic groups that live in the more prosperous south of marginalising them.

The recent violence comes amid assurances by the CMA that it was committed to a peace accord brokered by Algeria and due to be ratified at a ceremony in Bamako on May 15.

MINUSMA, the UN peacekeeping mission in Mali, urged all sides to sit down together Friday on the eve a meeting in Bamako between African Union, EU, US and Algerian representatives to discuss the situation.